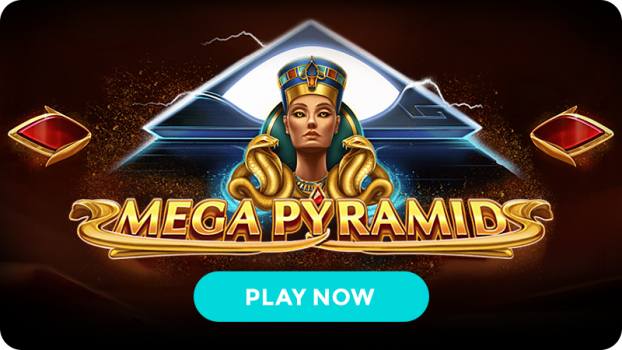 Mega Pyramid game shows up with a theme from the old times Egypt, it was established by Red Tiger Gaming on the 24th April 2019. You can participate in this slot across all platforms, be it mobile, tablet or desktop/laptop, and you can place wagers between 20p and £20 for every spin. The slot has 4 rows,5 reels, and 30 ways to win. The transparent reels are in a desert setting with a big, mysterious pyramid at the background.

There is presence of storm roaring and lighting and thunder will go along the Arabic style soundtrack as you play. The enormous Pyramid isn’t just for show It actually holds a significant part in the game. At unpredictable times, a big eye will open on the pyramid cap stone (let’s assume it’s the infamous Eye of Horus, we presume), and a non-predetermined symbol will be selected and cloned on the reels.

The game also shows up with a nice free spins feature, the Pyramid Eye can other times help you stir the feature by giving you the third all-significant scatter. This game is of medium to high variance, implying that you will be required to adjust your wagering level and the bankroll in order to handle the dry periods between winnings. Its RTP is 96.18%, which is average, meaning the House Edge is around 3.82% on Mega Pyramid.

Mega Pyramid shows up with four higher value symbols that bring a typical representation of the old times Egypt theme, as well as the regular little value card suit symbols. You require 3 to 5 like symbols on a payline so as to win (apart from the Anubis symbol where two on a payline is a winner too).

Anubis – The highest paying symbol that gives you 150x your bet for 5 on a payline.

Scarab – It offers 8x your bet for 5 on a payline.

Scroll – Gives you 4x your bet for 5 on a payline.

Card Suit Symbols – Little value symbols that offer around 2x and 0.8x for 5 on a payline.

Mega Pyramid pops up with a visually exciting bonus feature that includes the mighty pyramid on the background. It is referred to as the Pyramid Eye feature, if you see lightning strike at the base game followed by thunder you will know that it is on. It is a random feature, when the eye of pyramid opens it reveals a symbol. The revealed symbol will further be cloned all over the reels, then a new payout will be offered.

Each time a scatter symbol lands, it remains sticky for random number of spins. This can assist you trigger free spins feature, if you make to land much more scatters. The Pyramid Eye may also give you the 3rd scatter on reel 5, that’s if you already landed sticky scatter on the reels 1 and 3.

There exists no progressive jackpot on the Mega Pyramid game, however, you can win attractive payouts here. The maximum win is 5000 times your bet, this totals to £100,000 that is if you play with the highest stake level which is £20. A very good potential for medium to high volatile game.

Of the 600 online casinos scanned in the UK, Mega Pyramid was discovered in 225 of them. 27 of the casinos placed Mega Pyramid on their lobby. The average position in the casino lobbies is 140.72 for all the 600 casinos. The Slot Rank for Mega Pyramid in the United Kingdom is forty two.

Where to Play Mega Pyramid

If you like, you can play Mega Pyramid for real money at any of the below listed casinos:

In the month of July 2019, Mega Pyramid (a Video Slot provided by Red Tiger) score TOP25 position in the Slot Rank in the UK market.

Mega Pyramid is not a very complicated game, but it’s very well put together and visually pleasing to the eye. The mysterious pyramid with the Eye of Horus on top is a nice addition to the ancient Egypt theme we’ve seen so many times before. While the free spins feature is the main attraction, the random cloning of symbols on the reels by the Pyramid Eye can also land you some nice payouts. The max win potential is also pretty good for medium to high variance slot.