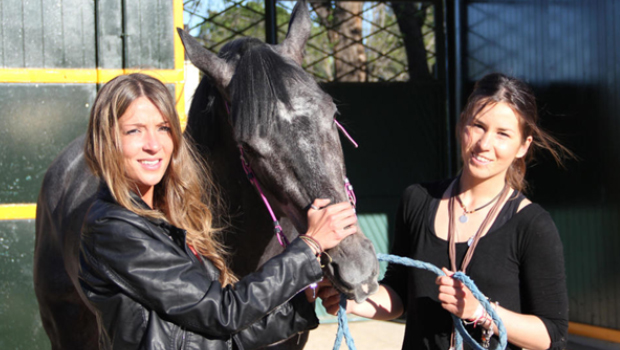 Three years ago, Maria Gomez Lechón , of 26 years, and Alicia Lopez , 27, were two universities in Madrid . Maria had left his Valencia home to study cinema in the capital and Alicia studying advertising. They had never seen a horse race and the world of turf did not call their attention. Today, when asked about Sunday May 8th nervous laugh. It is no wonder , because his horse ‘Kuvasz’ will run the Nouvel An Award in the Hipodromo de la Zarzuela in Madrid and is the inspiration for all bets.

We meet them to tell their own history and we sat talking under the spectacular tribune Racecourse Madrid, designed by engineer Eduardo Torroja . Mary and Alicia have greeted and exchanged jokes with each person with whom we have been finding from the enclosure doors here. “We now look great , ” warns me Alice, “but when we arrived a few years ago and having no idea how it worked this world had to fight for people leading in this life to take our seriously , ” he added .

It all started when a friend of Maria’s family proposed to accompany him to the races and she, who had small horseback in Valencia, agreed. I could not imagine taking first diversion from the Carretera de La Coruna to the race track, it would become his second home. After the races, his friend invited her to ride their horses and the next day Mary was presented at 6 am willing to try. His first experience was anything but peaceful, as they climbed into a horse and directly led to the track, where he was told to turn back to a soft gallop a canter. “The horse started and it was like lighting a rocket, could not control. I needed to give three laps until he was tired and I managed to stop it . When I approached others asked me: ‘Have you been afraid?’ I told them no, only anger and fatigue. ‘Phenomenal, then vouchers for this, “was the verdict.”

From that day Maria started riding for different blocks. Alicia followed suit and what started as a hobby eventually turned into much more. “I had the image of Ascot races and gave me the impression that it was an inaccessible world, but then I realized that is not so and that in the turf there is room for everyone. Since the owner who has fifteen horses to us, that we combine several jobs to support ‘Kuvasz’. It may sound strange that I say this when a few years ago had never brought me a horse, but I have very clear that I will stay in this world all my life. We have found our passion. Even before having to ‘Kuvasz’ we were totally hooked to the turf and every day is more, to the point that during the closure of the racecourse last season, when we think ‘Kuvasz’, which we had been preparing for a year, I was not going to be able to debut, we decided that we would move to San Sebastián or France. I, I dedicate to advertising! “He exclaims.

One of the hardest moments since I stepped on the racetrack for the first time was the sudden death of who was his mentor and friend, Jose Carlos Fernandez , who suffered a stroke while riding a horse. The famed jockey and trainer introduced to Alicia and Mary in the equestrian world and conveyed his love for the sport.