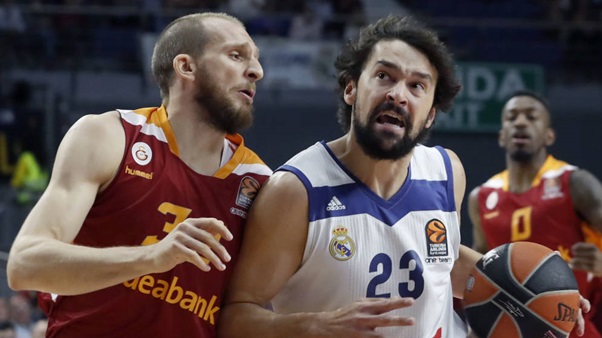 The base and the forward were the top scorers of Real Madrid in the victory against Galatasaray, the fourth of Real Madrid team in five days of the Euro league.

Few parties make much good to the Euro league as this Thursday at the Barclaycard Center. And not because of the spectacle seen on the parquet, there will be much better this season, but because of the strength that comes out the message that wants to launch the highest European competition. The bottom club Galatasaray team that has not won a game, be able to put things so difficult in their court to Real Madrid , one of the favorites, says something good about the new format: competitiveness appears to be greater, as a meeting desmotró Madrid ended up winning by  90-81 .

Summary of the match.

Ergin Ataman , coach of Galatasaray, did not reach that extreme, but for many minutes kept Vladimir Micov , a good triple jumper, as power forward, accompanied by a pure power forward in the paint. And the Serbian was shown in the first part, with 14 points and a 4/4 in triples. The Madrid did not find the way to cover that way and the Galatasaray dominated the first time thanks to its success in the triple (7/12 in the first 20 minutes) and to which it drove in the offensive rebound. “They were very clear about how they wanted to play , ” said Pablo Lasonews conference. “We are teams with two different styles. They wanted to open the field and have always played with four small . Attacking us in the one counted one. That has led us to have a more easily on the rebound , ” he said.

“We are teams with two different styles. They wanted to open the field and have always played with four youngsters,” said Pablo Laso

Ayon , Randolph , Thompkins , Hunter , Reyes … With such battery pívots seems a sacrilege to give up one to play with four open. Laso did not, not even got to Chapu Nocioni , who did not play any minute. Neither he moved Maciulis , which can occupy that position. Instead he opted for Reyes, a player who does not stand out precisely in that work, but the captain helped change the game with his defense on Micov. He came in the starting quintet in the second half after not playing a minute in the first and was beaten to the Serbian, who defended 8 meters from the ring if needed. Micov did not return a comfortable shot and did not put his next basket until the last moments of the third quarter (the last two of his 17 points). Despite that, his coach kept him on court almost all the second half and ended up playing more than 34 minutes.

Llull unleashes in the third quarter

Real Madrid defensive improvement after the break was what changed the course of the match: Galatasaray scored 47 points in the first half and 34 in the second .From there, Real Madrid grew. The steals allowed him to run counterattack, but it did not even get off the mark. Nor did Sergio Llull have a spectacular draw, which scored the last 11 points of Madrid in the fourth (13 in total in 10 minutes), including three triples, one more than those scored by his team throughout the first half.