Posted on January 7, 2015 by Admin in Little information, NBA 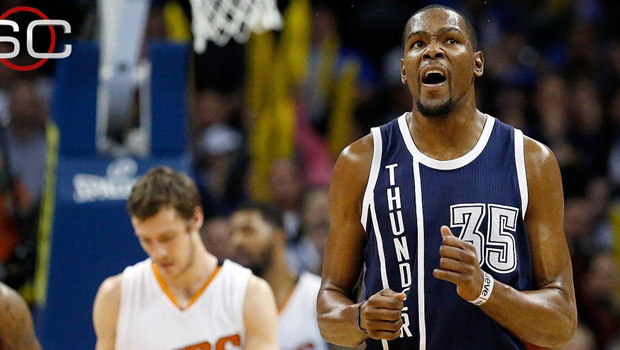 Kevin Durant is one of the stars of Oklahoma City Thunders in their rooster, and is one of the people who had so many injuries in this season that you head will hurt. The whole team has had bad luck with injuries since the star of the 2014/15 season and has had bad luck with matches that they have lost by one, two or three points in dramatic finishes. The time for Kevin Duran to lead the team came when Russell Westbrook was forced out of the field for two technical fouls, one in the game and one for bad words to the Phoenix bench. And guess what? Durant is out again.

Kevin Durant sprained his ankle in the same game just before the full time and was unable to continue the match and to help his teammates overcome the bad luck that has been following them ever since the season started in the next games. He was not there to be the leader of the team when the other star was out, and it is a situation that their teammates of Oklahoma City Thunders are aware of, and has been in that position before.

There was rarely any game that they two have played together, and it was rarely any game that there was not an injury in the Oklahoma City Thunders’ rooster apart from Durant and Westbrook. But just as everybody thought that this is going to be another loss in the match between the Phoenix Suns, Kevin Durant made 44 points to give advantage for his team in the fight against bad luck. He was the top scorer of the match even though he was forced out of the field after 39 minutes with six times hitting the point from the 3-points line, backed up with 10 rebounds and six assists. The Thunders won the game with 137-134 and it was the end of the bad luck for their hero Kevin Durant the whole Oklahoma City Thunders. He commented that his teammates are not there to be forgotten and the whole credit doesn’t belong to him as they were making space for him to shoot, especially for the three pointers. He made the crucial assistance to Anthony Morrow with just 1:55 on the clock until the end before he managed to put the ball in the basket giving the Thunders four points advantage.

He then missed six following games and was out of the field all the way until the New Year’s Eve where he was able to play again. Let’s hope that the rhythm of his plays will be on a level that it was on the last game that he played, and let’s wish him to be injury prone in the new 2015 year.

Don’t forget to visit jackpot bet online and check the good prices that are there. You may be one of the lucky winners to go home with the jackpot.