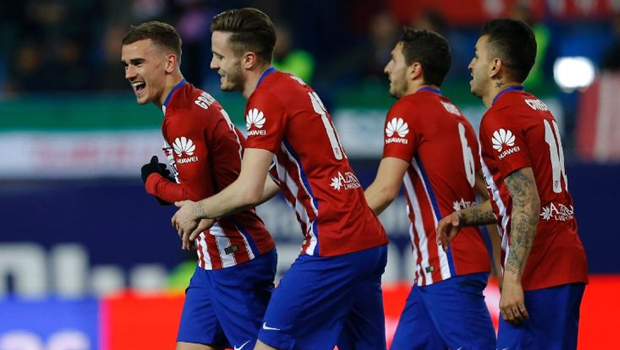 Lionel Messi created three goals and scored another as Barcelona warmed up for their Champions League showdown with Arsenal by thrashing Getafe 6-0 at the Camp Nou to equal a club record 12 consecutive La Liga wins.

Messi missed a fourth penalty of the season after Juan Rodriguez’s own goal had given the Catalans the lead after just eight minutes, but soon made amends by laying on goals for Munir El Haddadi and Neymar before he got on the scoresheet himself with a brilliant strike from 20 yards.

The Argentina international got his third assist by teeing up Neymar’s second after the break and then Arda Turan scored for the second time in three matches with an impressive bicycle kick.

Antoine Griezmann and Atletico Madrid eased to victory over Depor on Saturday.

Antoine Griezmann’s 23rd goal of the season was sandwiched by Saul Niguez’s first-half header and a late third from Angel Correa as Atletico secured their fourth straight league.

Atletico could have won by a wider margin as Yannick Carrasco’s second-half shot hit the crossbar, while Deportivo’s run without a league win was extended to 13 matches.

Iago Aspas scored a brilliant chip to give Celta Vigo a 1-0 win over Real Sociedad to boost the Galicians’ hopes of qualifying for the Europa League.

The former Liverpool striker controlled a pass from Nolito with his left foot in the area and then lofted the ball over the reach of Geronimo Rulli with the same foot to put the hosts in charge after 16 minutes.

The 28-year-old also scored a chip last week at the Bernabeu, the one positive of a forgettable afternoon for Celta as they were thrashed 6-1 by Real Madrid.

Elsewhere, Iago Aspas scored a brilliant chip to give Celta Vigo a 1-0 win over Real Sociedad to boost the Galicians’ hopes of qualifying for the Europa League.

Eibar halted a four-game losing streak thanks to Gonzalo Escalante’s equaliser in a 1-1 draw at Rayo Vallecano.

Rayo opened the scoring in the seventh minute through Portuguese defender Ze Castro’s header, but Escalante headed Eibar level before the break to help his side climb up to eighth in the table.

Rayo have now gone six games without a league win, but the draw was enough to lift them up to 16th, one point above the relegation zone.