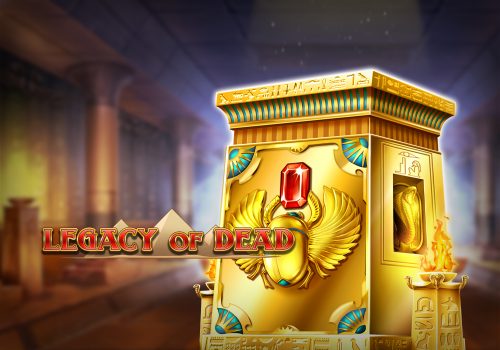 Legacy of Dead is a brand new 5-reel slot from Play’n GO based around the story of an ancient Egyptian King whose desire for riches was so strong not even death could stop him. Now his spirit has been released, and you can use his power to grab the riches for yourself!

The King himself is a symbol along with Anubis, the Golden Pharoaoh and the symbol of divine kingship, the Falcon. Match any 2 of these symbols along the game’s 10 paylines to pick up a standard win. The rest of the symbols are represented by 10 through Ace and the game’s Wild, the sacred Altar.

The Altar will substitutue for any other symbol on the reels to help you create winning combinations and, if three Alars appear on the reels it will act as a Scatter to trigger the Free Spin Mode!

Once Activated, you will be awarded 8 free spins and will randomly select one of the game symbols (excluding the Wild) to become a special, expanded symbol. If enough special symbols land on the reels (the same amount to achieve a standard payline win), they will expand and payout on the reels, even if they do not appear next to each other on the grid! The symbols will also not expand until any regular payline wins have been paid out, including those featuring the expanding symbol.

If you land 3 Altars on the reels at any point during Free Spins, the Free Spin mode will re retriggered and add more Free Spins to your total. Each time it is retriggered an additional symbol will be chosen to become an expanded symbol, giving you the chance to turn every symbol into a special symbol! The number of spins you can win is unlimited an can continue until the win cap is reached.

Legacy of Dead also includes the classic Gamble feature. After every winning spin in the main game, or at the end of Free Spins, if your winnings are below 2500 coins, you can gamble on the colour, or suit of a face-down card to double or quadruple your winnings. You can do this up to five times in a row or until you win up to 2500 coins!

Scatter wins; coins are multiplied by the total bet staked.