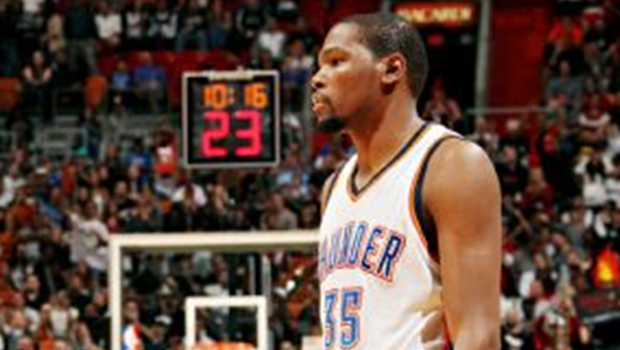 Kevin Durant, the star of Oklahoma City Thunders who suffered a bruised elbow last game said that there is no way that a little bruise will prevent him from playing against his home town team Washington Wizards. In a duel that the big guy had with the Miami Heat star Dwayne Wade the last game that was played in the NBA, they both jumped towards the basket where Kevin went for a dunk and Wade went to stop him, they hit each other in midair and Kevin managed to land awkwardly on the ground hurting his elbow and remained laying motionlessly on the ground. His teammates, the bench and the referees all ran to him to see what the problem was, and eventually they escorted him to the bench, where after some rest time he got back on the pitch and kept on playing. The incident happened on Tuesday’s 94-86 victory for the Thunders over the Miami Heat with 9:33 left on the clock and Kevin Durant kept on playing until 1:19 till the end where Thunders had 10 points advantage and a surely victory in their pockets.

In the interview after the match Kevin Durant commented that this is just a little bruise that he has had like 10 similar throughout his career, and that they aren’t going to stop him from playing the next games.

On the other pard of America we have the Cleveland Cavs with latest results. That’s the life with rookies, they have to play and eventually become great players. Such is another rookie from Cavs Andrew Wiggins, with still low experience level. Cavs are 5-5 at the moment and need more wins in order to be hoping for playoffs, but what other can we say or have a better tomorrow.