Jockey Bans continue to be reckless

Jockey Bans continue to be reckless

Posted on January 12, 2015 by Admin in Horse Racing, Jockey Bans continue to be reckless 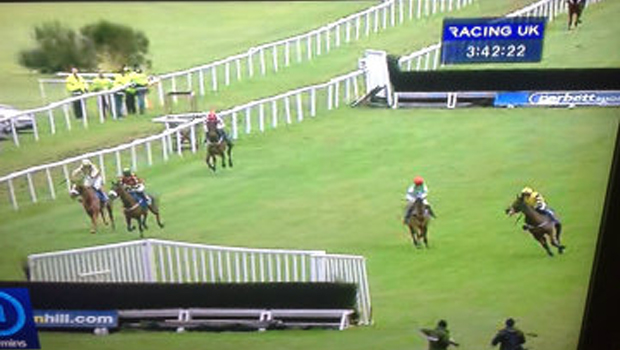 In a race that took place on Wednesday for amateurs hosted in Great Britain in the Ludlow arena tournament, two of the racers got big bans by the officials in the race for Ludlow. It was Jake Launchbury and Page Fuller, the jockeys on the right of the picture that managed to miss the entire track and go in the wrong direction. After successfully completing two laps, and in the third and final, they started going astray from the other side of the fence. After Launchbury Jake realized his mistake and tried to make a sharp turn left, he so that Page Fuller was following him, not allowing him the space to turn and join the other jockeys, they both managed to jump over the white fence, which cost them big banks in the jockey world.

In self-defense Launchbury said that he puts his hands up in the air as the guilt is all his. He takes responsibility for the actions he did, and the consequences are bit harsh but he will manage to deal with them. He said that he thought that it is the fence with water that they needed to jump, but totally forgot that it is removed in the third lap. His eyes were on the first place and his mind was working on how to catch the players in front of him. After he realized what he has done, he tried to make a sharp turn to the left, but that wasn’t good choice as Page Fuller was next to him and they both would have crushed if he made the turn.

Page Fuller on the other hand said that the completely forgot about the fence or the lap, he was just focused to pass Jake Launchbury as he was his shadow during the moments when they both made the mistake. He also admits that he should have watched where he went.

Check the online jackpot bet forums and earn good prices by betting on the site.