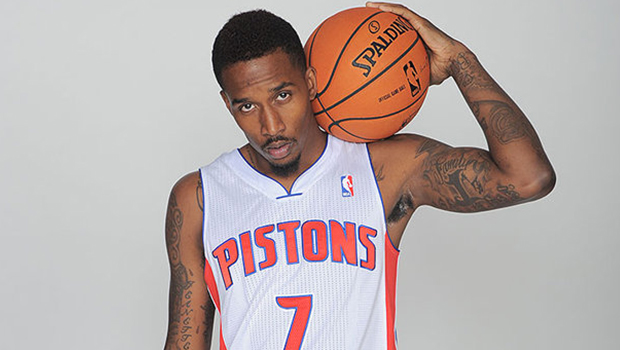 Detroit Pistons’ guard Brandon Jennings after having the best start in his NBA career, will miss his first game in the amazing season so far on Tuesday against Milwaukee because of his left thumb. Jennings was unable to help his Pistons in the loss against Atlanta on Friday night because he injured his left thumb in the dying minutes of the game. The guard had 15 points for the Pistons in that game, which seemed that they were not enough for the Pistons, as they lost with 10 points to Atlanta, with the final score being 99-89. His hyperextended left thump will be put under therapy, and hopefully will have a good reaction so that he can be ready for the next game. In the Detroit Pistons team say that if everything goes according to plan, he will only miss one game, the game against Milwaukee.

Jennings so far has averaged 15 points and 5.6 assists in his fourth season so far in the jersey of Detroit Pistons. He tried the shootaround on Tuesday morning but his thumb was giving him pain, so the coach made a decision to replace him with the Detroit’s reserve guard D.J. Augustin in the starting line-up.

As the coach said it won’t have any large impact on the game, they have previously rested Jennings with D.J Augustin. The thing that will change will be the bench dynamic, and the rotation of the guards. They will need another player in there, said Stan Ban Gundy, who is having a good season as a manager of the Pistons.

Jennings, who has previously shown some good game, will most certainly be missed in this new game. For example his game against Oklahoma City where he was the joker in the sleeve of Stan Ban Gundy, was reckless on the pitch.

In that game, which might be Jennings’ best in his season, he got in just four points in the first half, but that was not all of his game, as he did manage to point another 25 in the second half and the overtime, leaving the NBA crowd and spectators wondering what the half time talk of their coach Stan Ban Gundy was like. This got the Pistons their first ever victory in Oklahoma City, as Jennings and their team got the 96-89 victory that included overtime on Friday night two weeks ago. The thunders had a really good first half, but way better in the points than their opponents, Pistons, (30-21) managing to get 30% of their field shots and turning them into points. The 30 points in the first period and the 59 in the next three speak for it, that the coach of the Detroit Pistons Stan Ban Gundy did something in mean time to motivate his team, weather change the tactics, or bring in some joker as Jennings was in this game. He said that the defense was the key to their success and that’s the reason why they managed to grab that point. Let’s not forget Jennings’s eight points in the extra period.