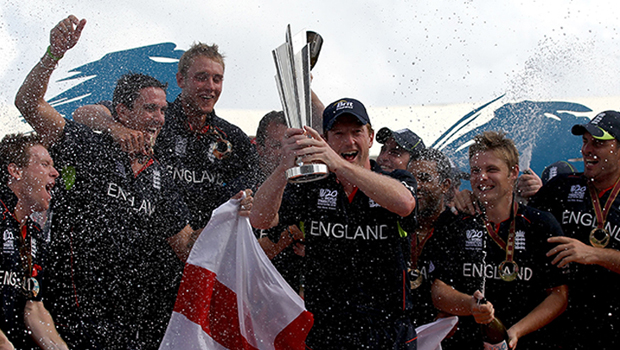 After finishing runners-up in the inaugural edition, Pakistan managed to erase the disappointment two years later when they beat sub-continent neighbours Sri Lanka in an one-sided final at Lord’s to secure their second ICC world title, largely thanks to Shahid Afridi’s consistent (okay, almost consistent) performances.

Lead by Younis Khan, the Pakistan team put up a spirited performance to reach the semis where Afridi almost single-handedly knocked out South Africa. He was the man of the match in the final as well.

Other noteable moments included ‘minnows’ Netherlands upsetting England in the first match in a last-ball thriller, Australia’s unexpected defeats and India (and Dhoni’s) poor run supposedly due to a rift. Who else remembers Dhoni bringing in the entire team for a press conference in a ‘show of unity’ following media reports of a rift between senior players?

Player of the series and highest run-getter Tillakaratne ‘Dilscoop’ Dilshan was in phenomenal form with 317 runs while Umar Gul was the star bowler once again, taking 13 wickets, including a stunning 5/6 vs New Zealand.

2010 or the year when England finally won a major trophy

This was still back in the old days, when the England dressing room wasn’t mired in talks of ‘reintegration’, Paul Collingwood was a performing captain and Kevin Pietersen was not a pariah, but their star performer. In fact, it was his heroics that earned England their first-ever ICC trophy in the perfect fashion, by defeating arch-rivals Australia in the finals.

Hosted by West Indies, the third edition of the World T20 was held less than a year after the second edition, thanks in part to the increased interest in T20 cricket and also citing restructuring of the Champions Trophy.

The highlight of the tournament was Paul Collingwood-led England, who weren’t very fond of the shortest format of the game, beating favourites Australia in what many called a truncated version of Ashes. As it turned out, this is still the only major silverware that England have in their trophy cabinet.

The player of the series, unsurprisingly, was Kevin Pietersen while Mahela Jayawardene was the highest run-getter with 302 runs and Dirk Nannes, playing back then for Australia, was the highest wicket-taker with 14 scalps.

2012 Champions or the time Gangnam Style was done to death

The 2012 World T20 showed what happens when some of the best freelance T20 players in the world, aka the West Indies team, come together. The result was there for all to see. The fun-loving West Indies stunned Australia in the semi-finals and then beat hosts Sri Lanka in a low-scoring final. Despite scoring a modest 137, the West Indies restricted Sri Lanka to 101 in reply before Chris Gayle led his team-mates in a celebratory ‘Gangnam Style’ dance, the choreography that was the lasting image from the tourney.

Many heralded this triumph as the resurgence of Caribbean cricket, as they won their first World title since 1979. The fact that the once-tainted Marlon Samuels was the Man of the Match in the finals seemed like the proof of this revival. However now, merely four years later, pay dispute and contract issues means it might have been a false dawn after all.