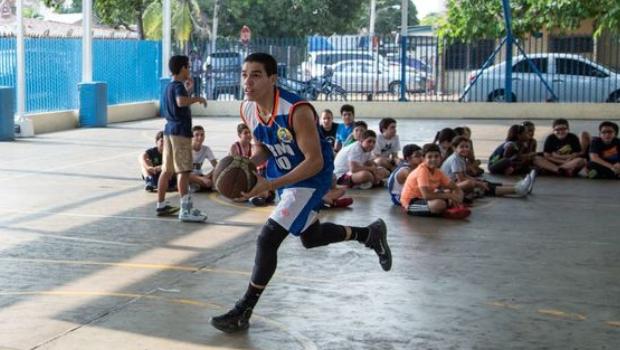 Jairo González found in the basketball much more than a sport. The eaves of the U-18 team Enrico Fermi got a second family.

“Usually people think that in basketball are just colleagues or people you play with them anymore. Here (in the Fermi) has it created a family where we go out together, study together and we’re in the same room, “he said.

Just the ties between these partners are due, in part, have played together since very small. The team came in kindergarten, as we reported, as a student project, all grade classmates, who “decided to play basketball.”

In court you like to wear number 10 to follow the footsteps of his father and trainer, Hector Gonzalez and his sister Luznela Gonzalez, who also practiced the sport.

At 16, Gonzalez had an outstanding performance in 2015, getting along with his school’s U-16 Championship Basketball League Kiwanis and U16 runner-up of the Lidecopa. As an individual leader obtained the maximum numbers in rebounds (91) and blocks (26) in Kiwanis, while Lidecopa was leader in rebounds (97).

Last year I had the opportunity to wear the colors of our country again, strengthening the American School in the tournament CODICADER 2015. “I thank God for giving me that opportunity. Bring those six letters in the chest is proud, “he said.

Jairo this year made the jump to the U-18 in both tournaments. To date, the Fermi Kiwanis had a difficult start to the quintet of the American Academy of Panama, which ended up winning by 57 to 50. At this meeting, our Sports Star of the week made 3 assists, 15 rebounds and scored 20 points.

In Lidecopa they go level with one win and one defeat. The victory went to the team of Albert Einstein (14-61) Institute, while Gaston Faraudo fell to the difference of 10 points (82-72).

His reference player is the recently retired Kobe Bryant. “Despite his years, and they thought it was presumptuous, there was always humble and always it was minded to seek many things.”

For Jairo, basketball can be an option that allows you to get a scholarship, and thus achieve one of its main goals: to be a dentist.

“I would love to win a scholarship to study. With my size, I do not think you get to aspire to something more, because honestly I play positions three, four or five and my size should play one (point guard), “he confessed.

His desire to be trained in this profession is a noble goal, helping others. “My goal is with a group of fellow basketball, we are going to study medicine and dentistry, get to make trips within the Republic to help children and people in need,” he said.

Similarly, he hopes to open, with her sister, who is studying medicine, “a free clinic for people who need it most.”