Posted on August 3, 2015 by Admin in Basketball 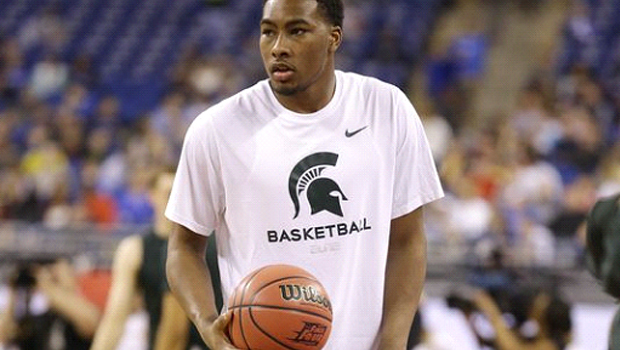 This is Javon Bess, the basketball player who sustained a hard injury on a match on February the 1st, and has been out of the pitch ever since. He has had hard time going through depression and different kinds of mental breakdowns the 1st month of the injury, but then realized he is not going to get any better if he keeps on doing that, so he decides to train and work hard on his leg and speed up the healing process. The Michigan State University’s doctors predicted his comeback to be somewhere between late September and the beginning of the October, but thanks to the hard work every day of Javon Bess, the 6 foot 5 tall MSU player played his game two months earlier than expected.

He enjoyed the Tuesday’s Lansing Moneyball Pro Am league game, and the Aim High Dimondale feeling was not the same when he came back. Last time the two teams played together was when Bess was injured, and they played it without any special effort. But no it took Eron Harris and Marvin Clark JK, Javon Bess’ teammates from MSU last year, the overtime to get to the points they came for. Although it was Javon Bess’ 1st game after the comeback, he did an outstanding job and it is obvious that he is the leader and the one that carries the game in his team.

It is sad that a talent like Javon Bess went through many injuries even in his college days. He played only 12 games last season, having went through two surgeries, one on the fifth metatarsal on his right foot just before his freshmen year, and another one on the same foot in March. His average was poor as well as his minutes on the pitch, only 2.7 points in 12 minutes on the field. Due to the games he played he was ineligible for the red medical shirt, which would open his door to more games and better healing after them.

His Coach Tom Izzo said that he was thinking and thinking for two or more weeks whether it is the right time to bet Bess back to the fields. He mentioned that Javon Bess did an extremely good job over the recovering process the last 6 months, and that he deserves to be in this game, but the danger of having him play a game before fully recovered may cause him another several months off the field, and that is not good for the team, and definitely not a good sign for a player that already had injuries in his college for his entire career.

He showed his character in the game with good defense and rebounding, as well as with few physical duels with his former mate Eron Harris. Harris is known for being a bad boy, after being mentioned in an arrest attempt, but Bess is not going to let anyone play his game in his field in his home town for sure. Let’s wish Bess a career without injuries and pain.