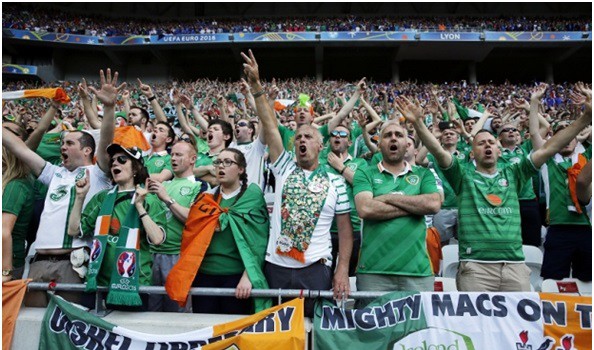 Euro cup tournament is going on to the further levels and the teams which are in the tournament and putting their best to sustain. On the other side, people would have gone through much news regarding the mess created by the football fans of different teams.

Fans have created many troubles and Paris was very much frustrated about their behaviour. In fact some of the teams have been disqualified for their fans worst behaviour. However, still the tournament keeps going.

The authorities in Paris have struggled a lot to control everything and make sure nothing happens to the fans. Though they have implemented much safety measures, many things have been occurred and even many fans were arrested by the police.

But the fans from both Northern and Southern Ireland were exemplary in their behaviour. Though the fans of other teams have created mess they remain composed and behave exceptionally.

Therefore the Paris Authorities have praised those fans and appreciated their way of behaving during the tournament. Almost every authority has been impressed by the Irish football fans. Recently the Mayor of Paris Anne Hidalgo has announced that she would like to honour those fans for their excellent behaviour.

Anne Hidalgo has appreciated the Irish fans and she said that she would like to give Medal of the City of Paris to be pleased about their fans. This statement has made every Irish fan happy. The Irish government and the players are also very happy about that and they should really feel proud about their fans.

Added to that, the Mayor mentioned the Irish fans as the model for the supporters all over the world. She also thanked them for their attitude and for keeping the festive atmosphere calm and enjoyable.

Actually Paris medal is an honourable medal which is been awarded since the year 1911 for honouring the individuals with exemplary behaviour. Recently a footballer Zlatan Ibrahimovic has received the medal. He has played for Paris St Germain in the last four seasons and got retired from the sport once after the elimination of Sweden from Euros.

Though it is happy news for Irish fans, this announcement has got local criticism. However, this is being the hot topic on all the French media. The Mayor Anne Hidalgo has written about this to the Northern Ireland First Minister Arlene Foster and President of Ireland Michael D Higgins.

The authorities have announced that the medals will be presented in a ceremony by inviting all the fans of both Irish teams. This will be a very proud moment for the Irish government. Irish people are looking forward the ceremony. As the Mayor said the Irish fans have set an example for the supporters. The fans of other teams should learn from them.