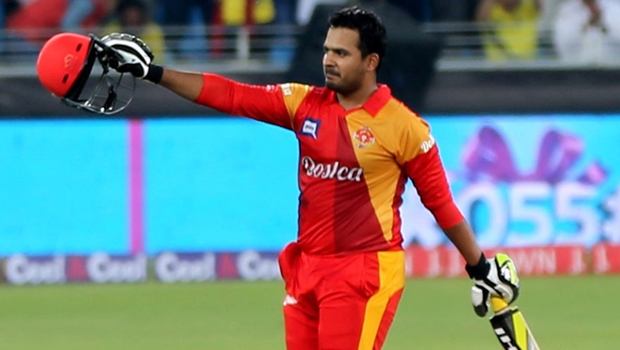 Pakistan have included opening batsman Sharjeel Khan and fast bowler Mohammad Sami in their Asia Cup and World Twenty20 squads after injuries to Babar Azam and Ruman Raees. Khan, who played the last of his three T20s in 2013, guided Islamabad United to the Pakistan Super League final with a century in the playoff win against Shahid Afridi-led Peshawar Zalmi at Dubai on Sunday. Quick single: Tait denied hat-trick, Islamabad reach PSL final His ton, featuring eight sixes, set up a showdown against the Quetta Gladiators in the final of the inaugural PSL in Dubai.

The Pakistan Cricket Board says Khan replaces Azam, who broke his left forearm during training in the PSL, and was out for three to four weeks. Raees has a grade-one hamstring strain, and was replaced by fast bowler Sami, who has taken 11 wickets in the PSL. Islamabad United batsman Kalid Latif, who scored 190 runs in the PSL, has been included in the World T20 squad in place of Iftikhar Ahmed. The Asia Cup starts in Bangladesh this week, and the World T20 in India next month.

The opinions expressed here are the views of the writer and do not necessarily reflect the views and opinions of Cricket Australia.

Led by Mignon du Preez, South Africa will face Australia, New Zealand, Sri Lanka and Ireland in Group A but Hilton Moreeng, the head coach, is pleased with the balance of youth and experience in the squad and expects his team to qualify for the knockouts. “From a selection point of view and from the preparation we have done in the last two years, we think we have selected the best squad for the conditions that we will be faced with,” Moreeng said.”It’s a well-balanced squad with lots of experience and a bit of youth. We’ve given ourselves the best chance to play well and compete, as well as to qualify for the knock out phase,” he added.

In the previous edition of the tournament in 2014, South Africa caused an upset, knocking out New Zealand on the way to their first-ever semifinal appearance. Moreeng believes there’s opportunity to repeat performance in India, citing the high confidence within the squad.

“Players learn all the time and what better way to learn than from the ones who have done so before. We’ve played some of the top teams in the world of late. We have just finished a series against England and are busy with one against West Indies now. The exposure to top-notch players is invaluable for what we are trying to prepare for.

“The confidence in the team is much higher now, we all know that on the day in a T20 match anything can happen, one over can swing the game either way so the execution of our skills on the day will be key.”