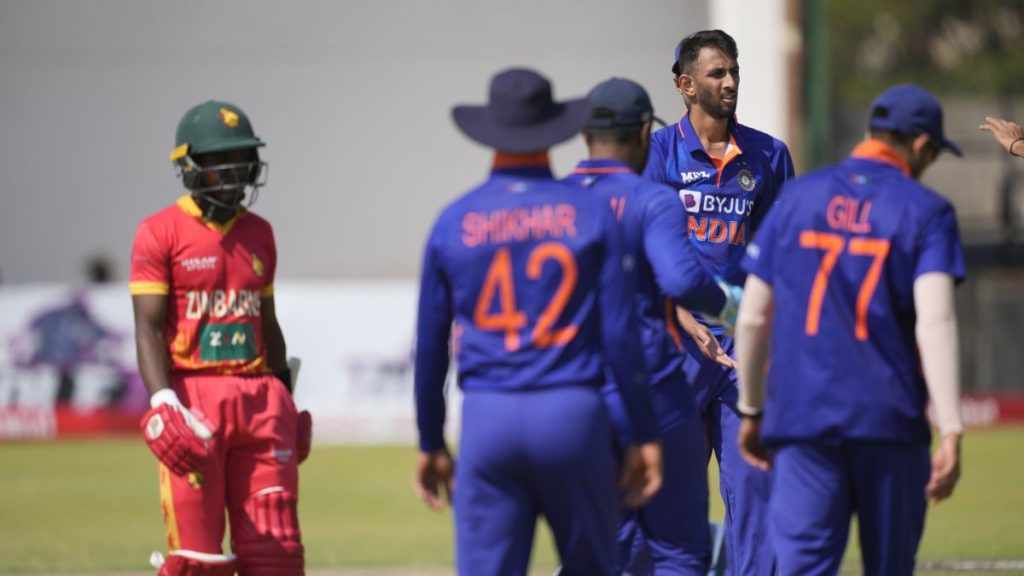 The betting review consists of the latest performance, head-to-head, squads, predictions, odds, tips, statistics, and all information about the game. If you have any experience, then you can also use it here. Both teams would like to win this game. However, the Indian side will easily win this game. They defeated the same side in the last 2 matches. Here is a summary of the game to assist you with betting.

Both teams played their last game on Saturday. Indian team won the toss and decided to bowl first. Shardul was replaced on the team. He proved well in the game. All the host side went back to the pavilion after making 161 runs. These runs are not enough to create pressure. Sean Williams and Ryan Burl created some resistance with 39 and 42 runs, respectively. But, it was not enough to stop the Indian bowlers.

On the other hand, Shardul Thakur picked up 3 wickets. At the same time, the other bowlers picked up 1 wicket for each. That is the reason to stop Zimbabwe on just 161 runs.

On the other side, Zimbabwe bowlers also did well at the bowling started. They picked up KL Rahul, the skipper of the Zimbabwe side, on just 1 run. After that, Dhawan and Gill succeeded in staying on the crease. Both players posted 33 runs, respectively. On 94 runs, the Indian team lost 4 main wickets. Then, Deerpark Hoods and Sanju Samson faced all the pressure of bowlers to stay on the crease.

Sanju Samson declared the man of the match of the game. He proved himself as a top player in-game. On the other side, Jongwe took 2 crucial wickets for him. Moreover, the opener of bowling also gained one wicket for him. All the information showed that India would be happy to do a clean sweep in the series.

KL Rahul, Deepak Hooda, and Shikhar Dhawan are prominent bats for the Indian side. Zimbabwe focuses on Sikandar Raza, Jongwe, Williams, and Rayan Burl. But, all the players are struggling in this series. They need to stay on the crease for maximum to win the game. Here is head-to-head information for you.

Both teams played 2 games in this series. Indian team won it by 2-0 overall result. So, we can take some expectations from this result.

All the predictions were made on behalf of past data. According to this game, the Indian team has an 80% chance of winning. On the other side, Zimbabwe picked only a 20% chance to win. Here is the final concussion for gamblers to place a bet.

After reading all information and a summary of 2nd game, you can make a prediction. Yes, the Indian team is a better side to win another game of the series. They are going to do 3-0 in the series. All the major players of the Indian team are taking a rest for this. However, the remaining XI still has the power to do its best. At last, the Indians will win the game without any issue.