Posted on September 3, 2022 by Admin in Cricket 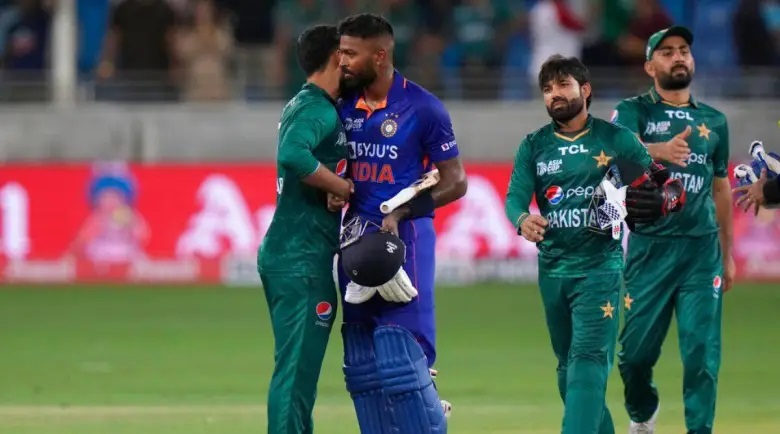 We know that both teams have qualified for the final four of Asia Cup 2022. Moreover, everyone knows about the latest result between Pakistan and India in the last game. Yes, Pakistan failed in that game by 5 wickets. However, Pakistan came back very strongly in the next game. Green shirts beat Hong Kong in the next game to take place in the final four. Here is the complete detail of both teams.

Pakistan and India were in the same group for Asia Cup 2022. Pakistan failed in the 1st game of the Cup. by doing betting first, Pakistan posted 148 runs in the given overs. No one scored 50 runs as a single hand. Hardik Pandya was the primary bowler to pick up 4 major wickets for Pakistan. That is the reason to restrict Pakistan on 148 runs. However, it proved a tight game for all viewers and players.

The last two overs changed all the facts and figures of the game. Haris Rauf released some runs in the 19th over. It changed game-overs.

In the last and 20th over, the Indian team was happy to chase just 7 runs. Muhammad Nawaz picked up the wickets of Jadeja on the first bowel. It created a lot of pressure in the Indian camp. DK joined the crease to face Muhammad Nawaz. He failed to take a single in 1st ball. In the 2nd ball, he changed the end with Pandya. Padya succeeded in finishing the game by remaining cool and calm.

If we talk about the performance versus HK for India and Pakistan, then Pakistan rattled the HK on just 38 runs. However, the Indian team defeated the same side by 40 runs. There is an absolute difference between the two results.

Both teams faced facing each other for 7 days. The Indian team succeeded in winning the game by 5 wickets. It will create some pressure on the Pakistan camp. Here are the expected predictions for the game.

India team picked 60% chances to win the game. At the same time, Pakistan has a 40% chance of winning. Pressure will remain the central part of the two teams.

Both teams contain a lot of star players in them. Indian side added KL Rahul, Pandya, Kohli, and Sharm to fight hard versus Pakistan. B Kumar and Arshadeep are central bowlers for them.

Naseem Shah, Dhani, Nawaz, and Haris are central bowlers in Pakistan to stop the Indian players.

In T20 games, the record of the Indian side is better than Pakistan. The same side also has pressure on the green shirts. So, they can win this game without any issues. However, the existence of Jadeja can create a problem for them. We made predictions very carefully.