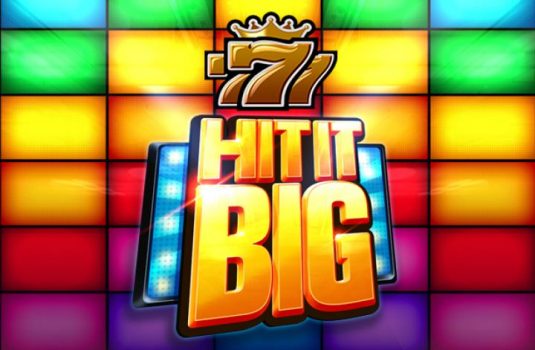 Hit It Big is a fantastic and exciting game show slot provided by ELK Studios. It was launched on 9th April 2019. It has five reels, three rows and five ways to win, and the key feature is the game show feature where you can win a multiplier boost up to a thousand times your bet.

The game slot also comes with four varying base game features, and you can win up to twenty-five hundred times your bet on this very volatile game.

The game carries you into a game show studio, and you now get to compete for the significant award.

It shows up with all the commentary, glamour and flashiness you can anticipate from a game show. This assists in giving the game an authentic feel.

Before we take a keen look at all the fun features you can find on Hit it big slot, here is a summary of the most essential technical information for this game:

The RTP of ninety-six percent is just close to average as you can achieve, and there isn’t much more to comment about that. Note that Hit It Big is a highly volatile slot, and you must ensure that your bankroll and your stake level is adjusted so as to handle the fluctuations.

There are very fantastic bonus features found on Hit It Big slot, let’s take a closer look at them here.

On the main game, you can profit from the Reel Game Feature. There is a set of neon-colored feature buttons above and below the reels. The buttons usually display an array of various features that can give you knew combinations on each spin.

Once any of the lower and upper buttons match on any given spin, you profit from whichever feature displayed on the buttons. The feature is also shown on the huge jumbo Tron above the reels, so as to leave no doubt about what is happening. You can as well land on four different features on the same spin (however, this is not very likely to take place too often), the features are as follows:

Locked Wilds – covers reel 1 and 5 with stacked wilds, keeping them locked in place for three re-spins

Respin – awards a re-spin to all reels

Multipliers – gives you a multiplier between two and fifty times.

Once you land three scatter symbols, you trigger the Hit It Big Bonus Game, which lies at the center of this game show slot. The game show bonus game shows up with three various levels, and your task will be to hit the stopping knob as a selection marker trots through different multipliers randomly. The multipliers are masqueraded as game show awards like hatch, motorcycles and other good items.

Each time you achieve a multiplier, it is replaced by a Bandit symbol, and when the marker stops on a Bandit symbol, the feature comes to an end. When you land on an inwards pointing arrow, you are directed to the next level with much better multipliers and awards. You can as well hi arrows pointing outwards which degrades you to a lesser level. When you arrive at the topmost level 3, you can now win the multiplier, which is a thousand times your bet.

Hit It Big does not come with any free spins dedicated feature, however it’s not missed because of the other fun features you find on the game. It’s possible to get lots of re-spins, which are the same as free spins in various ways, we, therefore, cannot blame ELK Studios for not including a free spin feature on this game.

You will not find a progressive jackpot to win on Hit It Big slot, not local jackpot either. That does not imply you can’t win some very good payouts, the max win is two thousand five hundred times your bet. If you participate with the highest bet of £100, this totals to £250,000. It’s a great potential, nonetheless, it could perhaps been higher with regards to its high

Hit It Big tablet and mobile

You can play Hit It Big slot on tablet and mobile.  ELK Studios is knowledgeable on how to optimize their games on all platforms. It is a fantastic game to carry with you to wherever place you go. It is like having an entire game show inside your pocket. Play it on your iPad, iPhone or your Android device as you desire.

ELK Studios has formed a great game show based slot with Hit It Big. Its theme is suitable for a slot machine. The game is authentic, and the features are innovative and fun. Some individuals may miss a dedicated free spins feature, but it would not do any good to this game. The only grudge is somewhat the low potential of only twenty-five hundred times your bet. This is an extremely high volatile slot, and the maximum win could have been higher.