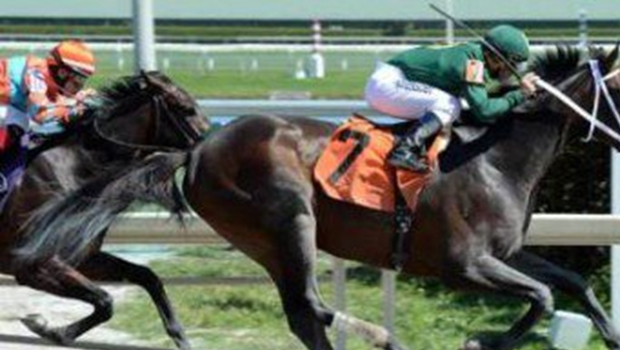 Interestingly his name in Spartan dialect translates Gloria, although Majesto is the combination of the names Mauro and Jesus, sons of the owner, with the word all; the truth is that this giant son of Tiznow surprised Saturday when he arrived second in the Florida Derby (Grade 1), the test for tresañeros most important of Florida and one of the qualifiers for the Kentucky Derby, the first step of the Triple Crown American .

Majesto went to a race complicated, closed 35-1 in the betting because it was the lot of Maiden Special Weight (not claimable losers) to a Grade 1 against two undefeated: Nyquist and Mohaymen, the first was six – six , and the other five five so a winner of a race in the role was not clear, however Majesto managed to get second, three bodies medium and Nyquist, who now has a record of sevens, and with a push that credited as the horse to beat in longer shots, then looked uncomfortable in the 1,800 meters from the Florida Derby, and after the goal, in what Americans call the “Gallop- Out” Nyquist moved easily and pulled far ahead.

The career of Majesto has great significance for Venezuelans it is the first time in the last 45 years that a horse with Venezuelan trilogy, trainer , jockey and Venezuelan owners, enter the coveted ” Carrera de las Rosas”.

In 1971 Cañonero not only ran, but the winner was ridden by Gustavo Avila, the training of Juan Arias and property of Pedro Baptista , clear Cañonero though it was an American horse was coriendo in La Rinconada, so his feat surprised to the world.

Majesto is trained by the zuliano Gustavo Delgado, was ridden by Javier Castilian and belongs to the currency of the Stud “Group 7C Racing_Stable”, the businessman Alejandro Ceballos and his family, who are also breeders in Venezuela in the haras “Urama” located in Yaracuy state.

Majesto, leading real options of clinching the victory in the races of the Triple Crown, could mean the first victory in the Kentucky Derby for Javier Castilian, a record rider in the United States, winner of three Eclipse Awards, considered the number 1 world, but which lacks the glory of the roses in their curriculum.

Alejandro Ceballos, president of the Stud “Group 7C RacingStable” expressed his joy to converse with Meridiano: “Majesto is not my horse and my family only, is a horse that belongs to all Venezuela, so we have to link it in Kentucky Derby has to be for our country proud that after 45 years Venezuelans have the opportunity to have a horse again in the Kentucky Derby jockey, trainer and Venezuelan owners, we should also be proud that the blood of Majesto then will enter national breeding, because if they were to do some negotiation with the horse so that outside stallion in the US, will be with the condition that the harasUrama be reserved at least five services for their mares per season , “he said.