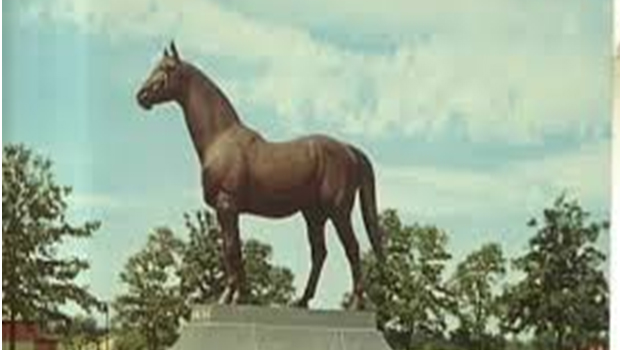 Man o’ War was bred on March 29, 1917 and was later put on price on the August 17, 1918 as a yearling to Samuel D. Riddle of Ney York for $5,000. At two, ‘Big Red’ had started racing. This was his starting career and had at all times had 1-100 odds to his name. He had a mean wins of 9.42 lengths and in his 9 races among them six at two, he supported 130 pounds. At three he had 135 and 138 pounds. He is remembered for breaking and setting records most notably the two world records, and five American records. However many people saw him breaking several more record had he had a good adviser. Man o’ War was unavailable for the Kentucky Derby with a total of 17 horses taking place. However, during his win at Preakness Stakes, only seven horses participated and in another event Big Red crossed the finish line with 20 lengths to spare against his only competitor. It wasthrough his successful career that he oversaw over thirty wins. He finished his career in style as he beat Triple Crown champion and world record holder Sir Bartonby seven lengths. It was his amazing career success that saw him scoop the Horse of the Year title for 1920 and ended up on a high note with over $250,000 to his name.

In attempt to acquire the best ‘hunter type’ stallion, the Royal Canadian Mounted Police went for Big Red’s grandson to father the breed. Up to date, these stallions all have a commonancestor; Man O’ War. Before Big Red died, he had accumulated a total of 64 stake winners emanating from 379 foals. He was only beaten by Broomstick who had 66 stake winners to his name.

To keep the legacy on, Big Red daughters have foreseen their children taking to the stage and emerging victors in every event held in USA in the last 20 years. Before he died in 1947, Man O’ War was honored by different individuals including being honored with ‘colonel’ military rank by the Japanese in during the Second World War. He stayed at Faraway Farm in his retirement years from 1920 to 1947 when he died of heart attack. His death was ironically preceded by that of his long term caretaker Will Harbut in a span of days.

After his death, he was mummified and accorded with full honored military burial. He was buried in Kentucky Horse Park, Lexington, Kentuckyalongside champion War Admiral, stakes winner War Hazard and Brushupdam of War AdmiralGraveswhere his full horse statue stands.

He was in 1999 voted as “The Horse of the Century” by horsemen, fans and racing press.