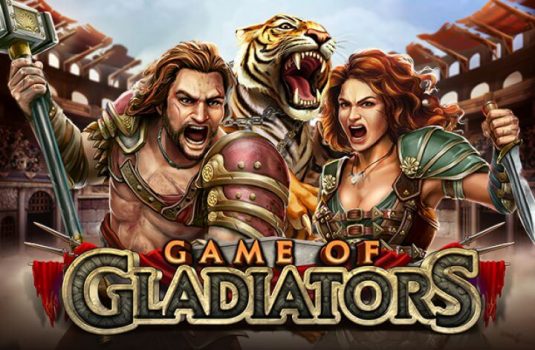 Game of Gladiators is a 5 Reel 20 Fixed (1 coin) video slot with 5 base game features and a Free Spins Battle feature.

During the main game, the player can be randomly awarded one of five PRIMUS mystery features:

The main Free Spins Battle feature is ENTER THE ARENA:

A player selects a Champion which replaces the base game scatter.
Each Champion has a different Victory Prize if they win.
Amazonia, or the Female Champion, will be awarded a bonus 20X to 100X wager multiplier. Spartacus, or the Male Champion, will be awarded another full Free Spins feature.
The feature ends after the second bonus game is completed, win or lose.
All Victory Prizes are additional prizes added to the feature total win.

The Champion wins the battle by defeating all opponent groups at the top of the reels.
The Champion loses the battle by allowing more than 11 opponents in total.
Champion scatters initiate attacks.
Prior to attacks, all Gladiators will be added in their like groups with most powerful on the right. As the groups grow, their value increases according to the Battle Prize paytable.

Payline wins; coins won are multiplied by the amount of coins staked per line.

3) Default settings can be changed by the operator

4) If the default settings/bets are altered, the maximum wins will be altered as well

1) All currency values relate to a currency multiplier of 1 which is accurate for EUR, USD, and GBP.

3) A currency value is marked with an asterisk (*) next to the caption in all tables.