Posted on October 10, 2014 by Admin in Frankel Specials, Horse Racing 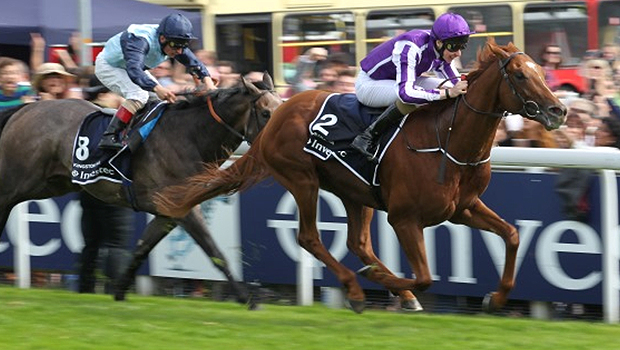 The Champion Stakes race, now sponsored by private investment company QIPCO, is one of the oldest horse races in the UK having first been run in 1877 and this flat race at Ascot is a Group 1 race open to all three years or older thoroughbreds. The race purse last time around was £1.3m with almost three quarters of a million pounds awarded to Farhh who won the 2013 QIPCO Champion Stakes.

He is not returning to defend his title this year following his retirement after last year’s victory, so who will become the new champion of this race by winning the 2014 QIPCO Champion Stakes?

Australia is an outstanding horse than only turned three years old in April this year and he has a record of five wins from eight races in his career. 2014 has been the best year for him by far as he triumphed at the Epsom Derby, Irish Derby and International Stakes before moving into early contention to take the QIPCO Champions Stakes title. His last race at the Irish Champion Stakes in September saw him start as the 30/100 favourite but found himself beaten by a neck by The Grey Gatsby with jockey and trainer admitting that mistakes had been made. His foe from that race is just the fourth favourite for this race, but you can sure that all involved will do all it takes to avoid a repeat of that result this time around.

Due to an injury that has seen Free Eagle sidelined for most of this season this horse may be the joint favourite to win the 2014 QIPCO Champions Stakes, even favourite in some places, but he has run just three races. His comeback race was two weeks ago in Leopardstown as he won the KPMG Enterprise Stakes, but his only defeat saw him well beaten by Australia last year. He has spent much of the year out while his rival has gotten better, so can Free Eagle live up to these odds to win this race?

Cirrus is an eight year old veteran of the racing scene having taken 21 victories and 20 places in a 58 race career to this point, including winning the 2011 Champion Stakes. He is the third favourite in the field ahead of Australia’s rival The Grey Gatsby and he has won the Prix d’Ispahan and Coronation Cup this year. He is certainly a great horse, but can he use his vast experience to beat the horses that have five years on him?

Australia is certainly the pick of the field and with that recent loss to The Grey Gatsby still stinging the jockey and trainer of the favourite to win the 2014 QIPCO Champion Stakes I feel that no mistakes will be made this time around and he is the horse to beat at Ascot in this race.