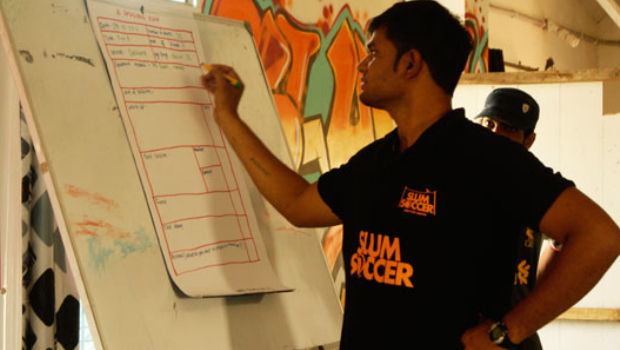 Like many others for Homkant foot ball is life as it changed his life from slum to a confident person who is aspiring to turn the others lives to be steady and progressing. Homkant is from India who grew up in the slums of Yavatmal. His life is changed by Foot ball game and he wants to change others life who are struggling in their life to be a successful and prospering than struggling for survival.

He has no other option that she has to compulsory earn money for her family as they are farmers who have no income for the survival. He said that his family could only manage few days of month with food but not all the days.

Homkant grew up in Yavatmal, with the grim reality of drought looming over his family of farmers. Pressure to go out and earn a living was a constant one. His family managed to eat sometimes, but often, they did not have enough money to do so. Money and jobs never stayed constant. The only constant in his life was his love for football.

Slum soccer is wonderful organization that turns the lives of the different people especially who are striving to make some money for the survival. Those who struggle to make even the normal life are helped by Slum Soccer club which turned 8000 lives to be brighter.

It is the best organization that uses the sports to direct the energy of such people in the positive direction and helps them to change their path to prospering. Like poor Homkant many other players have visited foreign countries for foot ball tournament and become famous in the country and abroad. The fact is that with Homkant many other players have played in the homeless world cup football tournament in which players from various countries who are from the same background of life participate and prove their skills.

For the persons like Homkant who does not know any other language than mother tongue playing in other countries is not ordinary thing. But taking it as a challenge the slum soccer club trained all such aspirants who have intense desire to achieve in their life. For the people who have desire, passion and ambition the clubs like Slum Soccer is really a gift from God.