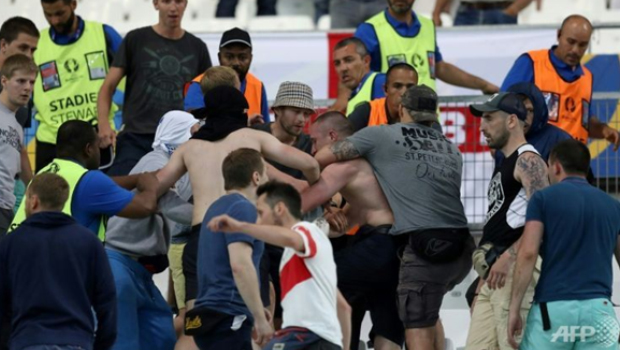 The Euro Cup 2016 is going on very crucially and the participated teams are putting their best to win the matches. Hence football fans all over the world are enjoying the matches and showing their support to their favourite teams.

Whenever a football tournament is happening, football fans will have many interesting moments. Similarly this Euro Cup is also giving many exciting moments for the fans. Much number of fans is moving to France now and they are very much eager to watch the matches live.

But as everyone knows when the fans of different teams are gathered in a place, it will definitely be a big mess. Therefore in order to avoid any such incidents, many police officers have been appointed in the tournament area and they are very doing their best in avoiding problems. However, still many issues are happening there and police cannot control the fans.

Actually, the authorities have banned alcohol in France until the tournament completed. In many places, they have changed the timings of alcohol shops therefore the individuals cannot get alcohol at anytime.

The main intention behind this prohibition is to avoid any unwanted troubles. But the prohibition itself has created a big mess among the fans. Few days before, some of the football fans went to an alcohol shop and asked for alcohol. But the people over there refused to give alcohol to them. Hence the fans started to fight with the shop people and they have thrown the tables and chair in the streets.

Then police came to the place and stop the mess happening there. In fact, they have arrested few of the people. They have given a warning to all the football fans in that area. The senior police officer said “we are ready to fight against the violence. If anyone wants to create a mess in the area, then they will have to face severe consequences. Those who caught intoxicated will be arrested without any explanation”

Actually, it is not possible for the police to control all the fans in the area. They can give orders and warning but when the problem gets severe, they will definitely take necessary steps to control the problem.

Even if the fans from different countries, police cannot consider that as a factor. But if they arrest any of the fans, there are many chances for international issues. Therefore they are struggling a lot to control the things happening in France these days.

When reporters approach police officers and enquired about the happenings, they said “The fans are discipline when they come to another country for an event. If they create any mess, then there is no other option that punishment. Therefore they should know their limits and enjoy the event as better as possible”