Fire on the field

Fire on the field 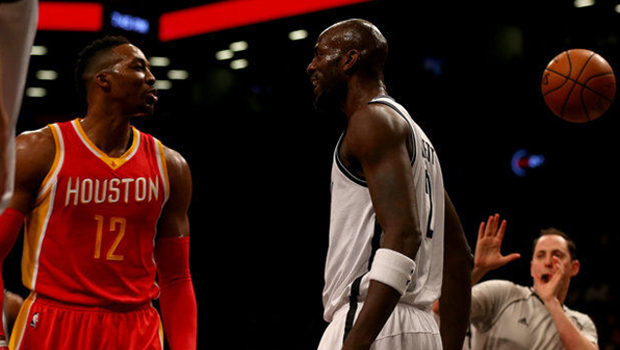 Monday Night was a bad night for Kevin Garnett after being thrown out if the floor because of an act he did towards Dwight Howard. Houston Rockets power forward Dwight Howard tried to catch a lob that was thrown for him and probably not on purpose made a foul against Kevin Garnett. The big Brooklyn Nets forward Garnett turned towards Howard and pushed him as act of disappointment. After Garnett pushed Howard, Howard pushed back in return, as he wanted to show that he wasn’t going to stay like a statue while Garnett was making fun of him. At that point Kevin Garnet got mad and went back to the duel, threw the ball towards Howard and managed to hit him in the face. After that he got really close and pushed him with his head, followed by a final push by Garnett. Howard responded to all of this with a slap that ended in Garnett’s neck, before the security and few other players including the referees split them.

Technical foul for both of them, and a personal foul for Garnett followed by ejecting Garnett off the floor and into the locker room. The media failed to find Kevin Garnett after he was thrown out and after the match for questions about the happening.

Questions were asked towards Dwight Howard in the 10 question session after the game regarding the fight. His answers were mostly “I don’t know” when people asked about the fight. He added that he doesn’t know how to feel or what to think about the fight and that it is out of his mind because the Houston Rockets won the game and that is what matters. What happened in the first quarter with 7:53 remaining on the clock doesn’t matter anymore to Howard. He says that he has to focus his energy towards the playoffs where they have qualified already, and not on some incident by someone who envy his play and team position on the conference table.

Questions were asked as well for what he has to comment about the Brooklyn Nets’ fans booing Dwight Howard every time he caught the ball until the end of the match after the incident happened. He answered that nothing of those matters, they are just fans and they can make little difference in his game, and it is their job to boo at enemy players. It is the game result at the end that matters and Houston Rockets together with Dwight Howard won the game. The coach of the Houston Rockets Kevin McHale said that it is not a big of a deal, that Garnett made a mistake that cost his team victory and he will know not to do stupid things for next matches.

Jackpot bet online is a sports site with gambling application that awaits you to come and play in order for you to win the jackpot or any of the other cool prices that are there.