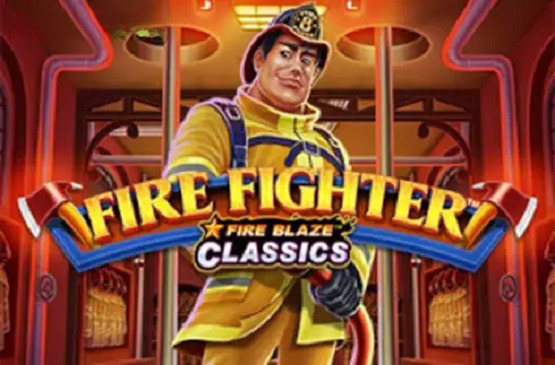 Fire Fighter is a slot machine from the Fire Blaze Classics line, which offers a number of fixed jackpots to add to the excitement. It’s obviously firefighter-themed, and it gives us a sense of what a fire station looks like. Rarestone, which collaborates with Playtech for their content, is the developer responsible for this game.

There are 5×4 reels in Fire Fighter, and each round will have 40 active lines. Fire Fighter pays an acceptable amount for a medium-high volatility real money slot, with a Grand Jackpot of 2,000x the stake and an RTP of 95.92 percent. Wilds, scatters, free spins, and the Fire Blaze Hold & Respin are the features I’d like to highlight.

When betting on Fire Fighter, you have the option of going extremely cheap ($0.10 is the minimum) or very high (up to $500).

If we merely look at the standard combos that may be made in Fire Fighter, we can see that you can win 200x your stake in a single spin (5x per combo). The Fire Blaze jackpots, on the other hand, are worth highlighting, with the top paying one costing 2,000x the round’s stake.

While this type of payoff comes with a medium to high level of volatility, the slot’s RTP of up to 95.92 percent makes it worthwhile to investigate.

Features of the Fire Fighter Slot

During paid plays, Fire Fighter symbols may appear on the center three reels, and they will be used as wilds. It gets even better during free spins, when they may appear on all reels and generate winning combos equal to the top symbols (up to 5x the stake). They’re utilized as substitutions for all kinds of normal symbols whenever you obtain them.

You’ll need the Fire Bell icons to appear 8+ times anywhere on the 5 reels to activate the Fire Blaze feature, which includes Hold & Respin mechanics. You keep the triggering symbols in place, and then three respins begin. Any fresh Bell symbols that land are locked in, and the respins are reset to three.

If there are multiple Bell symbols next to each other, they will combine together to produce larger Fire Bells. Finally, if you fill in all of the positions, you can win the Grand Jackpot (5×4 block of symbols). You win one of the middle jackpots, or 300 times your stake, for a 4×4 block. A 5×3 symbol block can pay anything from 80x the bet to the Major Jackpot. There are around a half-dozen other sorts of blocks described, each with a different reward range.

You also have a Fire Fighter logo that can be used as a scatter if you land at least three times. You’ll be awarded a payout of up to 50 times your wager, as well as 6 free spins. At least one Flame emerges as an overlay, ready to be transformed into Fire Bells or Wilds.

The story of a slot machine with a firefighting theme should appeal to a wide range of gamers. It’s created with contemporary graphics and is pleasing to the eye. Behind the tall reels, the fire station’s structure may be seen. The low-paying positions are filled with five Royal symbols, followed by representations of a fire extinguisher, a firefighter’s helmet, a vehicle, and the top-paying dog. Wilds are Fire Fighters, scatters are the game logo, and the bonus game is triggered by the Fire Bell.

Fire Fighter is another solid entry in the Fire Blaze series, and the theme this time matches the jackpot’s name wonderfully. If you’re a casual gamer, it appears to be a good pick, as long as the RTP is at least 95.92 percent.