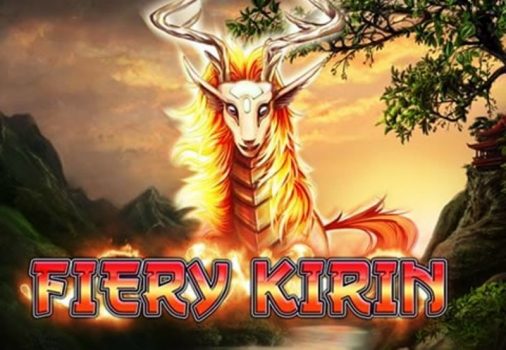 Fiery Kirin is an amazing online slot game from 2 by 2Gaming that has a Chinese theme and entirely based on a hoofed creature. Its release dates to the end of June 2019 when launching was announced across various bookies, which now recommend Fiery Kirin as a playable game on multiple devices.

Currently, this slot plays on a 5*3 layout using 5 reels and presents 243 BetWay. However, players can expand the paylines up to 576 using the wild symbols. Above the traditional feel in Fiery Kirin’s design, there is a river valley running in the background to give an old school impression.

As for the reels, which are inclusive of the A to 10 values there are other game tags such as the jade ornaments, coins, temple structure, and a mountaintop. Just like in many slots, a predominant wild replaces all other symbols bar scatters to trigger the Supper expanding feature when it lands on reel 3. Kirin can also be your choice for massive reaps with the umbrella woman being the top payer with an award of 33.33 times for landing 5 on adjacent reels.

Lucky enough for players, Fiery Kirin is available for play on various lobbies in the UK for both real money and demo mode.

Kirin is mainly a buildup of wilds and scatters, which have appended features to win you fortunes at this slot. On any spin across the reels, it delivers one of the following:

Wild Reel – often, one of the middle three reels will expand so that it goes to 4 high. Thereafter, a wild fills the empty reel and a player receives new calculations for payout.

Scatters – on a spin where a player lands 2 of these symbols, a third scatter will spin and give a chance to trigger the FS bonus.

On Fiery Kirin, you can deliver one of the following random bonus features to bang more wins during any round of play.

Magical Win Feature – in this package, the losing spins are magically bound to transform to winners.

Random wild feature – when playing, this feature activates to drop you a random selection of wilds on the reels.

To trigger the FS bonus on Fiery Kirin you have to land three scatters on the 3 middle reels. In addition, there are three envelope features to earn you Freespins on this slot namely:

Where to Play Fiery Kirin

Make sure to try this slot for real money or free on the following UK casinos where the adjoined bonuses are subject to T&Cs. Note that the list is not exhaustive.

Overall, Fiery Kirin is a valid slot with magical powers to let you enjoy great fortunes with just a spin. If you consider a virtual trip to China, then Kirin is the choice of a slot to play with.