Posted on November 26, 2014 by Admin in Federer loves the Davis Cup, Tennis 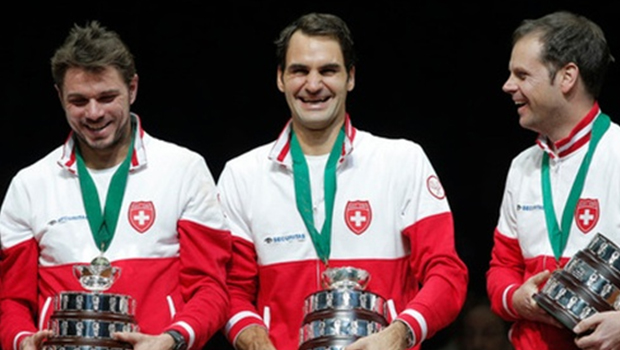 With the help of Roger Federer and Stan Wawrinka in their clash against the Frenchmen in the Davis Cup final that was held in Lille, France over the past weekend, Switzerland can finally enjoy the Davis Cup trophy in their hands. This was a moment that the 17 times Grand Slam champion Roger Federer was waiting for ever since he started his professional career 16 years ago. The Swiss, who had an injury before the Cup and his presence there was under question mark, made it to the Cup and lost his first match, on purpose or not, so that after that he could win the last match of the year and season with the best tennis that he had played in the last 12 months. Roger Federer faced Richard Gasquet on Sunday as he added the only major trophy that eluded him in the last 16 years of his life. Now his trophy chess is full and he can enjoy the ‘one of the best days of his life’ as he said.

Federer is pricing his teammates, ant that could have been seen for the spectators and the followers of the last big match this year, and the last match of the Davis Cup, as when he won the last point he needed to lift the trophy he made it clear that he was thankful to Stan Wawrinka and his performance. After the spectacular knee-drop and celebration, he stood up and run to Wawrinka, his international partner who had an inflammable last week with showed the crowd and the world that both of them won it there.

Federer said that he was happy he could stay calm for the whole match, and he thank Wawrinka for putting in so much effort throughout the years and especially in this last weekend in the Davis Cup where his performance was outstanding. He thank Wawrinka for giving him the opportunity to show what he knew best in the last match of the Davis Cup final. He then added at the end that this one was for the boys! (Teammates)

Federer showed that he is a good man when he did this interview, as he knew that the headlines and the stories were going to be all with his name in bold and large letters, saying that he won the match and the tournament. But it was really Switzerland who won it, and for the older followers of tennis it is clear the since 2004 up until now Federer only played one major game for his country, and the spectators of tennis know that Stan Wawrinka is the one who was leading Switzerland throughout the years.Wawrinkalostit in the finals over the Czech last year in Geneva, and he was the one to win a fifth rubber over Lleyton Hewitt in 2011 Australia. He was the one standing tall after a 5-0 crush against Kazahksta.

He was the one waiting for Federer to finally step out for his country, and at the end, the patience resulted with a trophy in his hands, in Switzerland’s hands.