Posted on December 16, 2014 by Admin in Federer and Wawrinkaunstoppable, Tennis 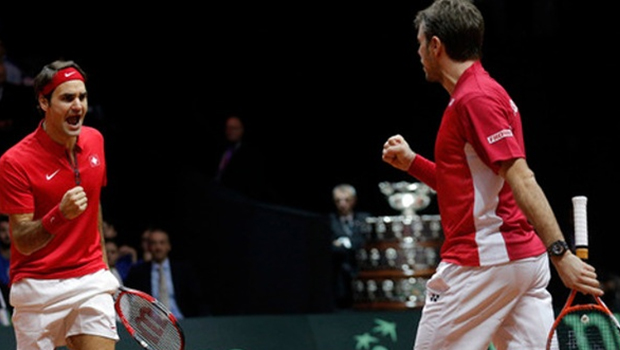 In Lille, France Roger Federer together with his semifinalist enemy at ATP World Tour Finals, Stan Wawrinka, in a three set match beat the Frenchmen JulienBenneteau and Richard Gasquet with 6-3, 7-5, 6-4 in the Davis Cup final.

Saturday night was the time when Wawrinka’s game accompanied with Roger Federer decided the match in Switzerland’s advantage.

If Federer can beat Jo-Wilfried Tsonga he will win it for Switzerland in the first reverse singles on Sunday it will be game over and a trophy for them, it not the Davis Cup final tournament will be decided by Stan Wawrinka and Gael Monfils.

Despite Federer’s loss to Gael Monfils, he is sure that his back problems are back in the past, as he finished the three sets match without any pain at tall. He showed it by the superb display of power in the doubles match, where he and his teammate Stan Wawrinka made the second point in the column for Switzerland, and now the result is 2:1 for the guests.

Federer says that he is feeling fine now and that he is constantly asked about his back, he said to the media smiling that he already told them everything. Federer, after receiving an injury in the ATP World Tour Finals, is feeling very good and is giving 100%, as he says.

Wawrinka and Federer won the gold in doubles 2008 Olympics, were on a four games losing streak in Davis Cup, but ended it in the right moment, celebrating their first win together on the tournament after three years. Wawrinka added that they prepared differently for this tournament and that they know they can beat any top players with this game.

The drums, cowbells and cheers were not enough for Benneteau and Gasquet to win the 2nd set where they made a good aggressive game, and charged for their enemies. The Swiss players did not fail under the impression of the good cheering of the crowd. Bet online for more prices and jackpots.

Benneteau said that Roger and Stanislas played very well, that Roger served good and the second shots were efficient. Jullien added that they never made any mistake. Benneteau won the French Open in doubles this year. He then said that Stan was very good on the net and rarely missed. They know they played against two very experienced players.

Marci Chiudinelli and Michael Lammer were supposed to play against France in the doubles, but the captain SeverinLuthi made the change after Federer was feeling well. On the other hand Arnaud Clement stuck with Gasquet and Benneteau. There were rumors that Tsonga will be unavailable to play in the reverse singles, but he brushed off the speculation, as Tsonga and Gasquel trained together early Saturday.

It is good thing that Federer, the No.2 on the list is back in the game. He was feeling good, shot some acrobatic shots and volleys. Let’s see how the reverse singles will go.