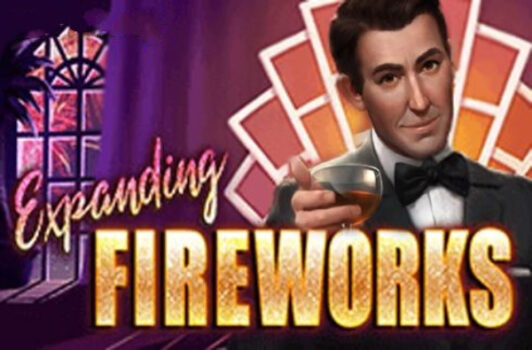 With certain types of games, we will see them release only during specific months of the year and that is definitely the case with fireworks themed titles, particularly ones which include New Year’s festivals also. Expanding Fireworks is such a slot, a Gamomat release that comes out weeks before the year’s end.

Expanding Fireworks is a 5×3 reels slot machine that only gets 10 active lines. It can pay very well, 2,500x the stake isn’t anything to sneeze at and it is expected to have its RTP at 96.05%. As for its features, they include Firework Rocket Expanding Wilds, Big Ben Clock scatters, upgrading images and free spins.

Using 10 active lines, the game requires 10 coins while total wagers can go somewhere in the range of $1 to $50 for a single spin.

Concerning the slot’s top payout, we are getting rewards of up to 2,500x the stake because of the free spins. It is going as high as 50x the stake per line or 500x total, in case we are looking at the potential of single spins.

The expanding wild(the major image) appears as a Firework Rocket. It appears as a wild but it likewise expands and assumes control over the three positions on the reel. While you can mix it with regular images, it can not be utilized to replace scatters. Its own wins will offer you as much as the jackpot image, so up to 50x the stake for a single line.

Next, we are looking at the Big Ben Clock which is utilized as the scatter. It additionally settles up to 50x the stake if you get it up to 5 times in view. Having it land more than three times gets you 12 free spins.

You can get 1, 3 or 12 more rounds while going through the free spins, if that you land 1, 2 or 3 expanding wilds. These Firework Rockets are additionally used to upgrade the high value images, assisting you with getting fewer of them in use, which improves the chances of huge wins occurring.

The New Year’s Eve celebration are regularly accompanied by champagne and fireworks, and the two are ordinarily mixed in slot machines which are designed for this occasion. We are seeing something very similar in Expanding Fireworks, a slot machine which starts us off with the Firework Rocket, proceeds with the Clock scatter, followed by the Man with the champagne glass, the Champagne bottle, two regular firecracker images, the golden four-leaf clover, the lucky horseshoe and the four Royals (J to A).

Expanding Fireworks is not a bad option if you need to celebrate the end of the year with a themed game. It has decent, RTP isn’t terrible and it has two or three features that could make the activity interesting.