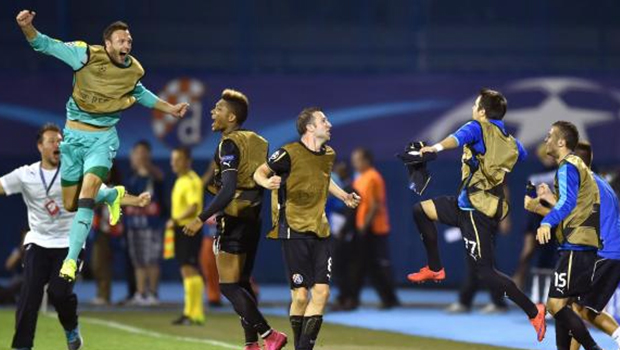 It was an outstanding day, as in always is, in the champion’s league 2nd day 1st fixture group stage, where groups from E to H met in their first duels in this year’s competition. There are some memorable duels, and duels which teams would like to stay in their memory forever, while on the other side, the same duels would like to be forgotten as they were a major failure.

Let’s take a look at how the teams performed and how the scores were in the Champion’s league Wednesday night.

As expected, Chelsea crushed Makabi Tel Aviv with 4 goals to zero, where Hazard managed to miss a penalty, and Oscar, Willian, Diego Costa and Fabregas scored for the English Champion, who is the only one of the English teams that managed to grab any points in the first group stage game, since both Manchester United and Manchester City lost on Tuesday, while Arsenal managed to lose to Dinamo Zagreb with the score of 2:1 with ox Chemberlain scoring an own goal, right before Olivie Giroud received his 2nd yellow card of the match. In the second half it was already 2:0 for the Croatian team after Fernandes scored in the 58th minute. Theo Walcott managed to get the only goal for arsenal in Dinamo Zagreb’s net in the 79th minute after a good pass by Alexis Sanchez, which was not enough for the gunners go get the three points in the possibly ‘easiest’ match in the group stage.

We had three draws today, one of which was Dynamo Kiev vs. Porto with the score of 2:2 (Gusev and Buyalskyy for Kiev and two times Aboubakar for Porto), 1:1 in the duel Gent against Lyon with Gent playing with a red card since 41st minute. Scorers were Jallet for Lyon and Milicevic for Gent, and the last and best duel of the day was Roma against Barcelona who played a 1:1 draw in Roma. Luis Suarez opened the score sheet with a goal in the 21st minute just 10 minutes before the equalizer by Florenzi. Roma were forced to change a goalkeeper after the scorer Suarez tackled Arsenal’s goalkeeper who is borrowed to Roma, Woiceh Szczesny, and it was time for De Santis to show what he was made of. The game had many chances but no more goals, and the team shared the points at the end of the match.

In the other games it was an easy task for Bayern in Greece crushing Olympiakos with 0:3, and same was with Leverkusen managing to score 4 goals to BATE in Germany, while conceding one in their net.

An interesting match to watch was Valencia vs. Zenit Petersburg where we had a one sided game in the 1st half being 0:2 for Zenit and a good game for Valencia again in the 2nd half being 2:2, with Witsel managing to score for Zenit one more time putting the final 2:3 for the visitors in the most precious three points that they will get in their group.