Posted on November 4, 2016 by Admin in Basketball 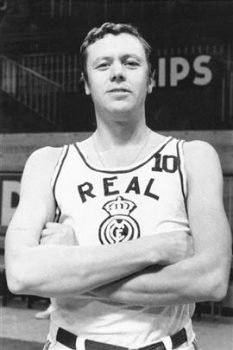 And yet, he was about to get lost for basketball because of football.Athletic was his first great passion when the family moved to Bilbao, but not being Basque was frustrated the signing and that disappointment made him change sport. From the Escolapios basketball team he went to the Eagles and from there, with 21 years and after being champion of Spain of Segunda, to the Aismalíbar de Montcada. Eduardo Kucharski was ahead of Pedro Ferrándiz, who wanted him for Hesperia, the Madrid branch. But the history, his and the one of the Spanish basketball, could have been very different if his parents had not rejected the offer of a US institute.

After two years in Aismalíbar, in 1960 he signed for Real Madrid and became an international star. In his thirteen seasons with the Whites, until his retirement in 1973, he won twelve Leagues and nine Cups, in addition to those four first European Cups of the club.

With the selection, in which debuted the 13 of April of 1958 in a friendly with Switzerland, was present in the Olympic Games. Of 1960 and 1968 and seven consecutive Europeans, from 59 to 71. From one of these, 1963 in Wroclaw (Poland), obtained his best personal memory as an international, in addition to the satisfaction of the seventh place of the Team, the best of Western Europe and the best of the selection after silver debut, 28 years ago.

Rarely who know of this player, because at that time the NBA was becoming popular and no one wanted to watch the European basketball simply because a lot better league was going on in the same time. But they weren’t aware that the players in the NBA were all European players in the past, and they were making the league special, just like Emiliano.
At the end of the championship, on October 13, the organization invited all journalists and coaches present to vote for the top five players, scoring them from 5 to 1. Emiliano scored more points than anyone else, 132, and was awarded a game Porcelain coffee reminder of the centenary of Poland. Behind him were Russian Petrov (116) and Yugoslav Korac (92).

Once retired, Emiliano was councilman and first lieutenant of mayor of Pozuelo de Alarcón and spokesman of the UCD in the Diputación of Madrid.