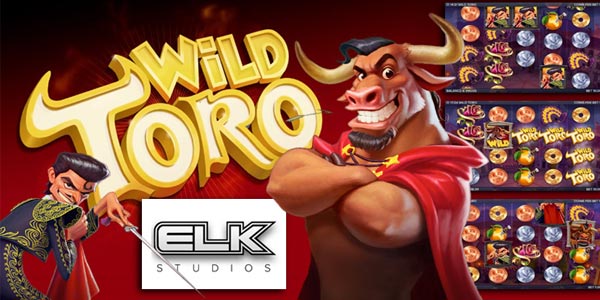 The Wild Toro online slot machine is special on several levels, and it offers an excellent level of action through its 178 ways to win. The main characters are Diaz Jr. and El Toro the bull. The latter will chase Diaz the matador during the game and will bring up a number of additional jokers on the 5 reels. The newest Wild Toro slot game offers several special bonus features, including Toro Goes Wild and Matador Respin Challenge.

The real action on this slot machine proposed by the software provider of casino software ELK Studios begins when the icon representing Toro appears on the fifth roll. Indeed, it activates the Toro Goes Wild functionality during which the bull chases the matador if it finds itself on any other roller. All the symbols Toro will encounter on his way will turn into wildcards, which will result in impressive winnings.

The Matador Re-Spin Challenge feature allows players to win several re-spins in order to trigger the main bonus game. During the latter, Toro will appear on the fifth roll while the matador will be present on rolls 2, 3 or 4. Toro will first roll the matador on the vertical, then on the horizontal while transforming all the symbols that are located on its passage in jokers. If there is no matador, Toro will simply go to the first roll. If the matador appears, it will change direction in order to catch it by leaving behind several wild cards to give you many exceptional gains. The Wild Toro Video Slot offers a decent redistribution rate of 96.4%.

The software developer ELK Studios recently announced very good news. Players can indeed rejoice at the launch of a Christmas theme themed video slot called Taco Brothers Saving Christmas. The title was officially launched on November 23 and features a scene that takes place in a Mexico City in the middle of winter, with snow falling into a rather quiet setting.

The Taco brothers plan to use the warm Christmas festive atmosphere to coax the wicked Captain Diaz, while the party is in full swing with symbols like tequila bottles, a guitar, gold coins and a treasure chest surrounded of a red ribbon. There are also bonus features such as multipliers, jokers, running jokers, re-rotations and free spins. Celebrate Christmas with the Taco Brothers and win 150,000 coins. This game can be played on the casino Tropezia Palace, and you can enjoy as much as you want.