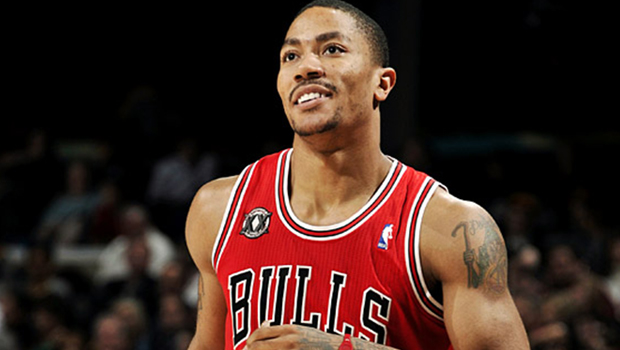 Derrick Rose of the Chicago Bull received an injury in the last quarter of the Bull’s last game on his left hamstring. The Bulls Eventually won the game with 100-93 over the Raptors.

The Chicago Bulls point guard received this injury on Thursday night’s game. After the injury he did not step on the field again, but he says he is not too concerned about it. Rose says that it can be some small cramps in his hamstring, but it’s something minor injury. His coach detected it and pulled Rose out of the game. The coach Tom Thibodeau in the interview after the game commented that he asked Derrick about it and he said that he was feeling fine, that it’s just tweaked hamstring. Tim is suggesting further analysis on the injured part of Derrick Rose, but the point guard hopes that he won’t have to do one. Rose adds that he is hoping an ice and first aid muscle stimulation treatments will do for it, and he likes to be able to practice on Friday. He says that it’s nothing serious, and hopes that he can play the Saturday game.

The injury happened with less than few minutes on the clock, when rose turned the ball over and fell on the floor. He was then forced to go on the bench with his head down. The unlucky Derrick Rose, already missed four games this season, and commented that this season is not as important as his health, was around half an hour on the pitch. He added 20 points, 5-for-14 from the floor, with four assists and five turnovers he was forced to get out of the pitch before the game was over.

His teammate Joakim Noah Stood behind Rose, and made an impressing defense to the to the point guard after the game, saying that he is disappointed and upset about the way the media presented Derrick’s statements earlier this week. He added that the former MVP’s situation has made an impact on him when it comes to games and startin and playing, but not in his overall season view. He will never put his small injuries ahead of the team, and if he could, he would even play injured.

Noah made an impersonal speech to the media when he explained few things about his teammates. He said that they are a team and this is something they see every day on different person in their matches and practice ground. Noah said that they are all in this together, and that they need each other. At the moment they need Derrick Rose, and that’s how it will be at the end of every day. The media turns everything around, and expects Rose, who just came from two hard operations and injuries, to be back on his feet abd present 100% on the field. Noah added that the media should calm down a bit, and it’s not the end of the world if Rose gets small injury. He will come back stronger, because that’s how he is.