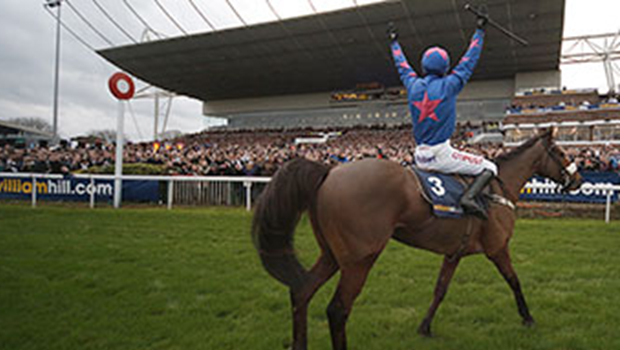 Cheltenham Gold Cup – and a £1 million bonus – eluded connections when the horse fell at the third-last fence at Cheltenham in March, having moved strongly into contention.

The Gold Cup was won by Don Cossack, who himself had departed at the second-last in the King George when in contention, and Cue Card’s former rider Joe Tizzard, who is now assistant trainer to his father Colin, is looking forward to settling the score once and for all in the The Bibby Financial Services Ireland Punchestown Gold Cup next Wednesday.

“I’m more than happy with the horse and he’s never shied away from anything,” Tizzard said. “The Punchestown Gold Cup could be a serious race and take nothing away from Don Cossack and Vautour, who have both stood up to everything. We’ll find out who the best is at Punchestown.”

‘I think he would have won the Gold Cup’

Cue Card took a crashing fall at Cheltenham but showed no ill-effects from the tumble when destroying Gold Cup-placed pair Djakadam and Don Poli at Aintree.

“He was in lovely form the day after the Cheltenham Gold Cup and bounced out of that race and schooled nicely before Aintree,” Tizzard said.

“He was in as good form as he had been all season then and, while I didn’t think he would be as impressive as he was in Liverpool, he sure ran a massive race.

“He’s not had a hard second half to the season and he seems in as good shape as he has been all season. I think he would have won the Gold Cup.”

Don Cossack is a top price of 13-8 for the Punchestown Gold Cup, while Cue Card is the general 2-1 second favourite. Vautour, who was narrowly denied by Cue Card in the King George, is a top price of 5-1 with Paddy Power. He is not a certain runner, though, as he could instead be sent to Sandown by Willie Mullins, who is chasing a first British trainers’ title.

The Tizzards are also responsible for superstar staying hurdler Thistlecrack, who will be bidding to complete the rarely-achieved Cheltenham, Aintree and Punchestown hat-trick in the Ladbrokes Champion Stayers Hurdle next Thursday.

Tizzard added: “Thistlecrack seems to improve every time that we run him. He’s come out of Aintree lovely and we’ve still not got to the bottom of him – we don’t know just how good he is. He seems a step ahead of them over hurdles at the moment.”

Another potential British raider at Punchestown is Barters Hill, who suffered a first career defeat at last month’s Cheltenham Festival but could bid to bounce back in either the 2m4f Grade 1 Tattersalls Ireland Novice Hurdle or the 3m Grade 1 Irish Daily Mirror Novice Hurdle.

Barters Hill had won his first seven races under rules and was by no means disgraced in the 3m Albert Bartlett Novices’ Hurdle at Cheltenham, fading up the punishing hill having pressed on a long way out.

Trainer Ben Pauling has been pleased with the horse since Cheltenham and suggested a drop in trip could be on the cards.

“I haven’t decided which race he’ll run in yet and it will depend on the ground. I’m quite tempted to go for the shorter race but we’ll see,” said Pauling. “I didn’t know if Barters Hill would run again after Cheltenham but he’s in such good form I thought we probably would go to Punchestown.”