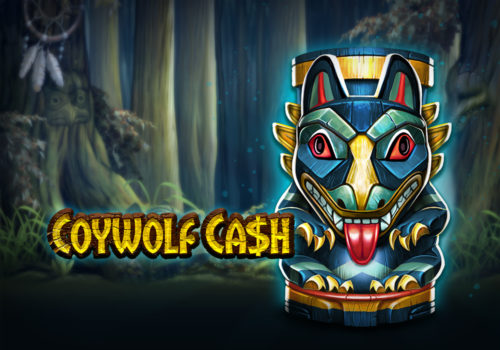 It’s time to join the hunt in the latest wild slot from Play’n GO, Coywolf Cash!

A 5×3 video slot, Coywolf Cash contains an outstanding FIFTY paylines and features some dynamic features to help you in your quest for prizes.

The Coywolf appears in your game in two different forms to make up the game’s Wilds. The first is the standard Coywolf, which substitutes for any in-game symbol (excluding the Scatters)l to create a win along the paylines. The game symbols are represented by the woodlands other natural predators, the Black Bear, the Wolverine, the Lynx, the Hawk and the Fox. The remaining symbols take the form of the 10 through A card values. Coywolf Wilds can also appear stacked on reel 2 and 4 during the base game, and during your free spins feature Prey Spins.

The game’s free spins feature Prey Spins is triggered by landing three or more of the game’s other Scatter, the Totem Scatter, on the reels during a spin. If three Totem Scatters land on the reels at the same time as the Mask Scatter, Wild Reels will be activated before Prey Spins begins. If any of the totems ends up in the same reel as an Alpha Coyote, they will not be transformed but will instead become Wild and still payout.

Landing 3, 4 or 5 Totem Scatters will award you 8, 11 or 15 spins respectively. During Prey Spins the Wild Mask is added to the Wild Reel, giving you the possibility to activate the second tier of Wild Reels!

During a Wild Reel spin if the Mask Scatter lands, its position will be highlighted, any Alpha Coywolf symbols will expand to fill their reels, and then the tier 2 spin will be triggered.

The tier 2 spin will fill the Wild Reel with Multiplier Coywolf Wilds featuring multipliers of x2, x4 or x7 and Totem Scatters with +2 or +4 spin rewards. The Wild Reel will spin, and if a multiplier Coywolfl lands it will expand to fill the reel below and then any lines will be paid out. If a Totem Scatter lands, it will award you its free spins and then fill its reel with Coywolf Wilds for big wins!

Become an apex predator of the slots with Coywolf Cash!