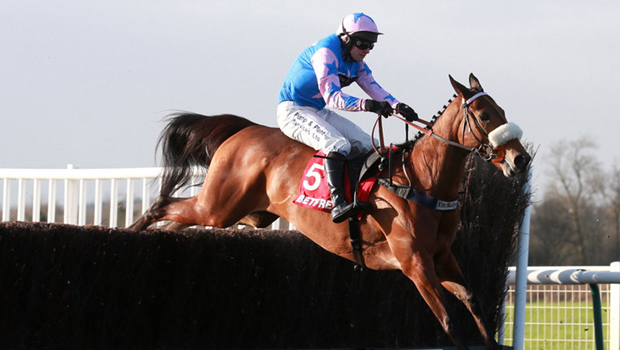 Though Willie Mullins’ 1/2 favourite took a narrow lead, Emily Gray found more to get back up close home to land the Listed spoils by a neck.

The pair drew 16 lengths clear of Killronan High in third.

“She’s extraordinary, she’s so tough. I thought she was beat jumping the last, but she puts her head down and gets going,” Bailey said.

“We’ve had a good break since she last ran and we purposely picked today. I was rather horrified when I saw a Mullins horse in the yard.

“We’ll see how she comes out of the race. I’d certainly step her up to three miles on good ground. Whether she will go round Cheltenham, I don’t know.

“She’s done her job. There might be another race for her. She’ll make a fantastic broodmare.”

However, Bass picked up a two-day suspension for using his whip above the permitted level. He is banned on March 10 and 11.

Gwafa (2/1) followed up his Fakenham success in smooth style in the High Definition Racing UK Next Month Novices’ Hurdle.

Paul Webber’s grey picked up long-time leader Blue Rambler two out and went on to beat the 8/11 favourite by six lengths under Richie McLernon.

Webber told Racing UK: “Richie was pleased with him. He’d learnt a bit from Fakenham and he’s learning his craft nicely now. Hopefully his form is going to stand up now.

“I think Aintree is the right place. He’s not entered at Cheltenham. He’s had tendon problems so flat tracks are more sensible than going up and down dale at Cheltenham. We’ll see next Tuesday what the handicapper thinks.

“I like the idea of Aintree and I was thinking of the Chester Cup off his old Flat handicap mark.”

Vazaro Delafayette (13/8 favourite) warmed to his task after a bad mistake at the first fence to comfortably take the Racing UK John Bigg Oxo Handicap Chase.

David Pipe’s seven-year-old cruised to the front at the second-last and won by 11 lengths from Here I Am without being put under serious pressure by Tom Scudamore.

The victory was appropriate as Scudamore’s grandfather, the late Michael Scudamore, rode the John Bigg-owned Oxo to victory in the Grand National in 1959.

Board Of Trade (6/5 favourite) was rewarded for consistent efforts in his three previous starts over jumps when opening his account in the Watch The Cheltenham Festival On RacingUK ‘National Hunt’ Maiden Hurdle (Division One).

Ridden confidently by 3lb claimer Tom Bellamy, the Alan King-trained five-year-old won in tidy fashion by a length from Boy In A Bentley.

Paul Moloney got round though well beaten on Heighnow on his first ride back following nearly three months off after breaking his ankle and his leg in a fall at Ludlow.

In division two, Nico de Boinville capitalised on the fall two out of favourite Penn Lane to steer Ben Pauling’s Treaty Girl (33/1) to a surprise victory.