Posted on September 3, 2020 by Admin in Gambling 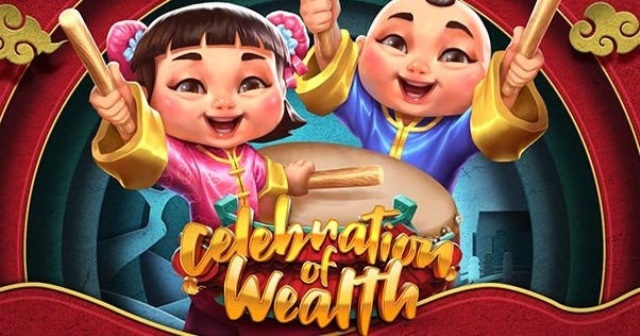 The Wealth Package is a set of three incredible Asia-themed games, centred around the idea of wealth, prosperity and good fortune.

The games, Celebration of Wealth, Temple of Wealth and Beast of Wealth, give three different gaming experiences while sharing certain qualities, including an exciting progressive jackpot feature.

Players can enjoy a festival of fun in this entertaining 5×3 payways slot title.

Based on the energy and excitement of a celebration of fortune, all of the HPs are based around symbols synonymous with Asian festivals; a Dancing Dragon, a Red Lantern, Firecrackers, Cymbals and ancient Chinese Coins. The royal flush card values characterise the LP symbols.

The Wild is represented by a pair of Fu Babies banging the drums in celebration, and this symbol will substitute for any HP or LP, to help create wins along the game’s payways.

The Scatter symbol is a cheerful festival scene filled with fireworks, and landing three Scatters on the Reel will trigger the Free Spin feature.

Once the Free Spin feature is active players can choose the size of the grid, and the number of payways they have during free spins, with the option of up to 7,776 payways.

The options they have are:

There is also the option of a mystery pick, which will randomly make the selection of the above options instead. The mystery pick can also randomly award 88 symbols placed onto the reels, with a random number of free spins.

Free Spins can also be re-triggered by landing another three Scatters on the reels during the feature. If re-triggered, it will duplicate the original choice of grid size made.

Four magical guardians stand watch, ready to bring great fortune to those brave enough to seek it in Beast of Wealth.

Beast of Wealth is a 5×3 payways slot, based on the powerful symbolism animals have in Asian culture.

The animals are represented in the HPs of the game; a Dragon, A Tiger, A Tortoise and a Phoenix. The 9 through Ace card values all represent the six LP symbols.

The Wild is in the form of a gong, a symbol of great wealth and status, and the Scatter is the Yin Yang, the ultimate symbol of duality and balance.

Landing three Scatters will trigger the Free Spins feature, giving the player an initial eight free spins. They must then choose which HP symbol they want to play with during the free spins. The strength of the symbol directly relates to how many of them will be placed on the reel strips:

There is also a mystery pick that will choose for the player instead.

Once the choice is made, that HP will be the only one that lands on the reels during Free Spins. Landing three Scatters on the reels will re-trigger, and award another eight free spins.

Temple of Wealth brings together some of the most well-known symbols of good fortune and brings them to the reels, to attract the lucky energy needed to win!

The game is a 5×3 payways slot, and the HPs for this title are the Gold God of Wealth, a lucky Fu Baby, a Golden Koi Fish, a Golden Ingot and a Gold Coin Tassel. The royal flush values of 10 through A are the LPs.

A lucky red door is the  Wild, substituting for any HP or LP symbol to create winning combinations on the payways.

The Scatter symbol will trigger Free Spins if three or more land on the reels in one spin, and is in the form of the Yin Yang logo.

Free Spins will introduce players to the final symbol, the Mystery symbol. The Mystery symbol is a Kylin but, when it lands on the reels will transform into any other game symbol, excluding the Scatter.

Once Free Spins is triggered players must choose how many Mystery symbols they want placed on the reel strips during the feature. The choices are:

Or they can make a mystery pick, and one of the options is chosen randomly.

Once they land, they will also stick to the reel and, on the next spin, will duplicate on that reel. This continues until the reel is filled, and then they will disappear.

Each of these games share a progressive Jackpot feature.