Posted on December 9, 2022 by Admin in Football 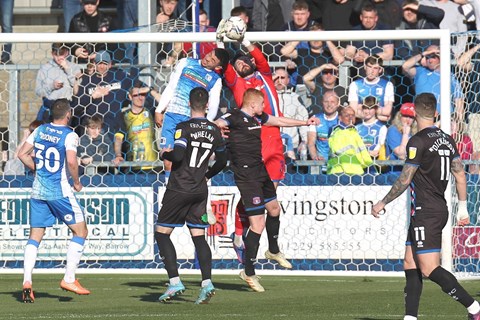 On Saturday afternoon, Carlisle United and fellow League Two promotion contenders Barrow will square off in an exciting League Two matchup between fifth and fourth.

In their most recent match, Paul Simpson’s team drew 1-1 with Sutton United, but the visitors’ poor run continued as they were destroyed 5-0 by Stevenage.

Last Saturday against Sutton, Simpson was less than pleased to see his team fail to hold onto a one-goal lead when Ryan Edmondson’s header was cancelled out by a Will Randall effort just before halftime to force a share of the spoils.

Carlisle’s manager bemoaned his team’s inability to create opportunities in a “very stop-start” style of football, but the Cumbrians’ playoff fate is still in their own hands as they now sit fifth in the standings with 33 points after 20 games this season.

Although Carlisle have lost their last three home games in League Two, defeats for their upcoming visitors have been frequent lately. Nevertheless, a five-game unbeaten run in the fourth tier is a strong foundation from which to build. Jake Reeves’ goal gave Barrow a slim lead over Stevenage in their matchup last weekend at halftime, but after the break, the floodgates opened and Jamie Reid, Daniel Sweeney, Luke Norris, and a Tyrell Warren own goal all scored.

The struggling Barrow team lost to the team in second place, marking their fourth loss in five games. Their manager, Pete Wild, called the outcome a “disaster” because his team’s numerous mistakes “gifted” Stevenage their abundance of goals.

However, they still hold a solid fourth place in the table, one point ahead of Carlisle, Bradford City, and Mansfield Town, and five points behind Northampton Town in the race for the final automatic promotion spot. Wild did not believe that his team was outmatched by Stevenage; rather, he thought they were the architects of their own demise.

Barrow’s recent five losses, two of which came in the EFL Trophy and FA Cup, do little to hide the Bluebirds’ appalling away performances; they have now gone six games without a victory on the road, losing five of them.

A competitive matchup between two teams that are only separated by one point in the standings may be in store, and neither group of players has had much recent success.

If Barrow can eliminate the individual mistakes, they should have a chance to avoid suffering yet another road loss, but Carlisle might have to settle for another point on their own turf.