Posted on January 12, 2015 by Admin in Brisbane Cup Semifinals, Tennis 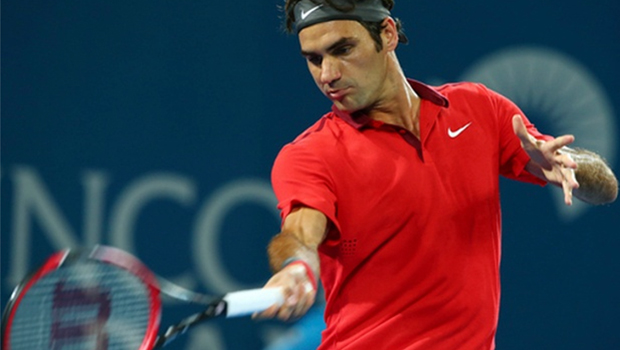 The tournament that plays the role of a pre party before the big Australian Open on 19th of January has four players left in its semifinals. The most obvious finale is the Swiss – Japanese one, but let’s not hurry and be patient to see if there will be any surprises.

Roger Federer showed once again that he is the man with the plan, and the boss on the tennis ground, defeating Australian 125th ranked James Duckworth in a 40 minute match where Roger only lost 1 gem in the second set. 6-0, 6-1 and six points lost in the first set were the records that Roger Federer set on this tournament, after having hard time defeating John Millman just 24 hours before this match and played a match in 3 sets.

Federer commented after the match that everything that he practiced during the winter break could be seen in this match, unlike the one against Millman one day before. The serves, the returns and the play that he is famous for – aggressive one, had all paid off in the 40 minute match.

GrigorDimitrov had a little harder match against Martin Klizan of Slovakia, managing to beat him with 6-3, 6-4. He will now meet Roger Federer and will try not to lose again like the last two duels with the 17 times Grand Slam winner.

Dimitrov is happy that he will get a chance to play against Roger as it is the experience that matters in the long run as he says. That is the thing that motivates even the greatest players to go on and have a great career.

In the next semifinal Kei Nishikori who has had an amazing 2014 year is meeting with Milos Raonic who is still feeling the injury from the ATP World Tour Finals last year.

They both managed to come to the semifinals after winning matches over hosts, as Kei managed to beat Barnard Tomic 6-0, 6-4, while on the other hand the Canadian Milos Raonic played a three setter with Sam Groth 7-6 (3), 3-6, 7-2 (2).

Groth has the most powerful serve on the tournament, but can work a little bit on his accuracy. He managed to get Milos Raonic off balance several times, and to be problem in the return balls after a serve, despite that he is way lower on the ATP ranking list.

Apart from the 17 Grand Slam Winner Roger Federer, the rest three semifinalists are yet to win one of the four major tournaments in tennis. Despite that they are one of the future waves of Grand Slam Champions by the critics as they can put up a fight from now with the top guns suck as Nadal, Federer and Djokovic.

Don’t forget to check the jackpot bet online sports forums and read about the new information and transfers. You can throw a coin or two in the betting center and hope to win the jackpot or some of the other cool prices that are there.