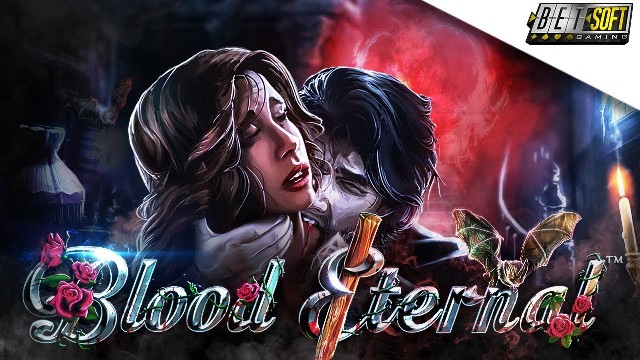 Betsoft Gaming has announced a new slot machine, Blood Eternal, which will be released on Monday, September 18th, which will deal with the subject of vampires, one of the most popular of popular culture. The developer already offers a free version of the slot on its official website, history to wait until the exit in real money.

The Blood Turner slot takes place in a lugubrious castle housing two vampires. We do not know how or why but a couple of humans are in this same castle, so to say they will have to be careful! For once, you will be more of the vampire side because you will enjoy free spins if they meet humans.

Blood Eternal has 6 rolls, 3 rows and 30 pay lines from left to right and from right to left. Wild symbols are present to ensure frequent winning lines; they have the ability to substitute for other symbols to form winning combinations more easily.

Two symbols of vampires and two of humans are among the symbols of the game. They allow access to free spins if they meet. The vampire symbols can only appear on the second and fifth reels and the humans on the third and fourth reels. If vampires and humans fall face to face, eight free spins are then awarded, as shown on the screen below.

With each free game, one to four wilds appear randomly on the reels, knowing that the two symbols that allowed access to free spins remain in their positions until the end of this mode. It is possible to increase the free spins counter once started, by finding again a couple vampires / humans. This also increases the number of wilds at each spin and guarantees excellent returns on free spins.

Blood Eternal is a worrying slot machine that will be available on Betsoft online casinos from September 18, 2017. It offers a redistribution rate of 95.03% and will be compatible on PC (HTML5) and mobile (Android, iOs and WinPhone).