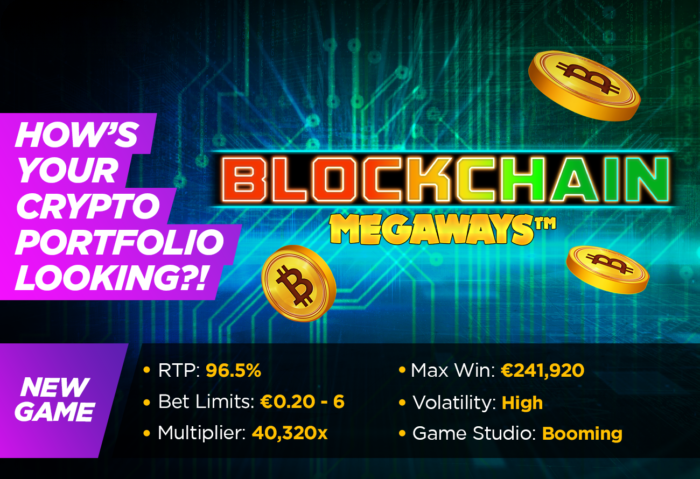 Booming Games has gone forward with Blockchain Megaways, an online slot. A handful of dull-looking currency icons traverse a 6+1 Megaways grid while a mid-level DJ spins a few tunes in the beginning of the game. The background has a Tron meets The Matrix meets The 13th Floor vibe to it, which is OK and has ‘futuristic’ undertones, but there’s something odd about it. Blockchain Megaways straddles the line between being out-of-date and being authentically retro. Although blockchains may appear to be a recent phenomenon, the concept has been debated in some form or another since the 1980s and 1990s. Perhaps Booming Games intended to pay tribute to the early pioneers by giving Blockchain Megaways a vintage look?

The main component of the grid features 6 reels, each holding up to 7 symbols, plus a horizontally spinning tracker reel, which adds 4 more symbols. With each spin, the number of symbols shown changes, resulting in anything from 324 to 200,704 opportunities to win. Booming has matched the volatility of cryptocurrency prices by making their game extremely volatile as well. Blockchain Megaways may be played on any device and takes wagers ranging from 10p to £/€50 each spin.

The standard payment symbols were made up of a combination of fiat and crypto coins. Rubles, Lira, Yen, Pounds, Euros, and Dollars sit on the table’s lower edge, paying out 1-1.5x the bet for six of a kind. Premiums are reserved for cryptocurrency icons like Doge, Litecoin, Ethereum, and Bitcoin, where landing six of a mind is worth 5 to 20 times the stake. Finally, multi-colored wilds appear to be substituting for standard pay symbols for the time being.

Although blockchain is still relatively new in terms of public adoption, the capabilities used in Blockchain Megaways aren’t. The cascade mechanic is the first to be discussed; it eliminates winning symbols from the grid and replaces them with new symbols. A new cascade is launched if this process results in a new win. In free spins, this is crucial.

Money symbols with values of 1x, 2x, 3x, 4x, 5x, 10x, 20x, or 50x the stake appear among the usual symbols. Players are given their collected values if money symbols appear on the rightmost reel at the same time as a QR code.

When the Guy Fawkes tiles are activated, they all morph into the exact identical symbol. Only regular pay symbols can be revealed.

When at least four scatter symbols appear on the screen, the game advances to the bonus round, which awards 10 free spins. During free spins, a progressive win multiplier is applied, which starts at x1 and increases by +1 with each winning cascade. The multiplier does not reset, and if four scatters appear, you will receive an additional five free spins.

At times, Blockchain Megaways gives players a flavour of the hacker ethos. Rather than joining the subject matter at the edge of the envelope, THE SLOT held back the revolutionary essence of the subject matter. Although the mini-cut scenes are cool, employing regular elements in a crypto game gives the idea that Booming wasn’t too concerned with pushing the envelope. They’ve come up with a few of ideas.

Booming Games’ second Megaways slot, Blockchain Megaways, follows the wildlife-themed Howling Wolves Megaways, which failed to excite. It looked well and played well, but it was badly hampered by one of the lowest winning potentials in a Megaways slot.