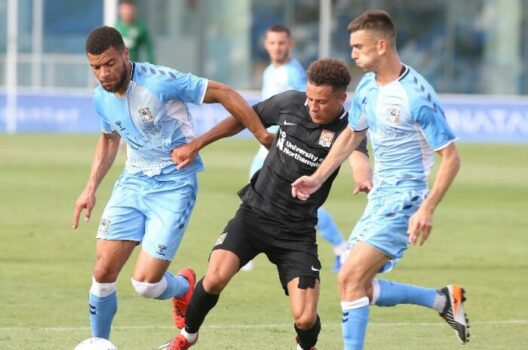 English Football League is scheduled in England. Blackpool and Coventry are ready to face each other on 17th August. The betting preview for the sides has consisted of all the primary inputs. Head to head, the latest performance, predictions, betting tips and odds have been taken after knowing the statistic of teams. After reading the detail of the article, you will be able to make the correct predictions. Do not worry, and I took all the information from the official sources.

If we see the last six games for the Blackpool and Conventry, I have checked that Blackpool succeeded in 4 games. The remaining two games did not favour anyone. One of the best things is that Blackpool did not lose even a single game.

Coventry City also played an exact number of games as the Blackpool. Its players played well in 3 games to defeat the opposition. But, they failed to overcome in the two games. At the same time, the remaining one game did not go to any side.

Both the side faced each other for two years. Wheres, the Coventry City scored 3-2 to defeat the Blackpool. That was the same season as the English Football league. It showed that the Conventry has more experience than the opposition.

After getting detailed information about the Blackpool and Conventry, we have concluded some results for the viewers. Blackpool has a 41% chance of winning the game compared to Coventry City (31%). Moreover, the remaining 28% chances did not favour anyone.

Blackpool did not play even a single game at home during the English Football season. I have checked that the top score for this team is one in the last round. There is not any difference in the scores of Coventry City. Their played also did the same job.

We have to wait till the start of the game. All the official players for the game will announce before the 30 minutes to begin the game. But, both teams need to put all the essential players in the game. Injuries may be an issue for any team.

Blackpool is priced at 6/4 versus the Coventry City of 9/5. However, the draw is priced at 23/10. All the data have been taken from the former expert’s experience. You may alter the predictions if you disagree.

Blackpool has more chances to win the game.

In Coventry City, we have seen that both sides successfully post the goals in the last three games.

After reading the complete detail about the two teams, it is not a big issue to declare the best side. We are hopeful for the best result for the viewers. Head to head, performance, goals, odds and tips favoured the Blackpool team instead of the other side. We made predictions and betting tips from the latest news and updates.