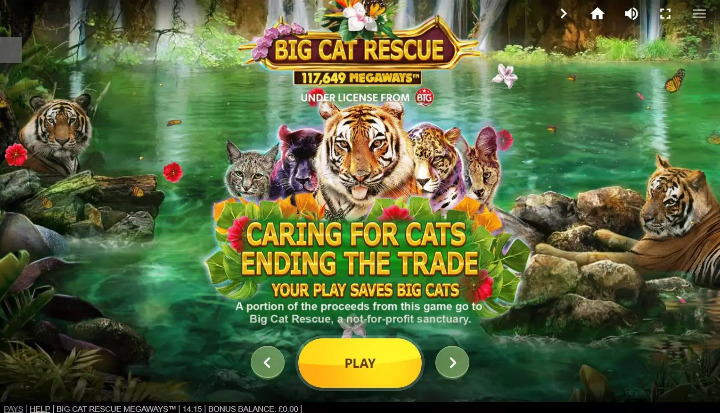 If you’ve been following Red Tiger for a long, you’re probably aware that they adore adapting popular stories into slot machines. A good example of this is the game they created for Joe Exotic, which is already getting a sequel. Big Cat Rescue Megaways will be released in the next months, and it will, of course, have a tiger-themed design.

Big Cat Rescue Megaways is a 6-reel slot with 116,749 possible combinations thanks to its many ways to win. If we go by the top awards of up to 10,481x the stake, it’s more than capable of making a significant difference in someone’s life. At the same time, it will have a high level of volatility and a low RTP of 95.75 percent. Scatters, free spins, multipliers, cascading reels, and Mega Wilds are all notable features.

If you can go close to the limits of Big Cat Rescue Megaways, you’ll be rewarded handsomely. In this slot, you can win up to 10,481 times your stake, which I think is a bit low for the type of features used. There’s a lot of potential in principle, with multipliers increasing wins by up to 343 times just from wilds.

This slot machine is extremely volatile, with a Return to Player of only 95.75 percent (normal would be 96 percent), making it worse than many others in terms of long-term odds.

Big Cat Rescue Megaways will add anywhere from 2 to 7 symbols to each of the six reels. Because this is done at random for each reel, the number of ways to win will vary considerably from one spin to the next. You can have a maximum of 117,649 active methods to win.

The White Tiger Wild is one of the most prominent feature symbols in this real money slot. It will come with a 7x multiplier and will be a reel-sized symbol. There can be up to three wilds of this sort appearing at the same time. When they’re all present, the boost to wins climbs up to 343x, as their multipliers combine.

For many players, the free spins feature will be the most appealing. It can be accessed by landing 3 to 6 scatters, which will activate a wheel of fortune spin. This determines the number of free spins awarded, which can range from one to twenty-two. It also provides you with an initial multiplier of up to 10x.

The multiplier increases each time you receive cascading reels after forming winning combinations. New symbols come down to fill empty spaces, perhaps resulting in more cascades and even larger multipliers.

The narrative of Big Cat Sanctuary provided the inspiration for Big Cat Rescue Megaways. If we look at the background image, we can get a sense of what it’s like inside. On the reels, the focus is primarily on the many felines who reside in this sanctuary. The graphics are excellent, as one would expect from a Red Tiger game.

The first few symbols include representations of four different card suits, as well as a paw print. The felines are the highest-paying symbols, with five in total (leopards, tigers, panthers, etc).

Big Cat Rescue Megaways could be an intriguing option for players, especially those who have already played Joe Exotic. The topic is intriguing, and the execution is excellent. The disadvantage is that the higher licence fees have an impact on the odds, as the RTP is lower than planned, at 95.75 percent.