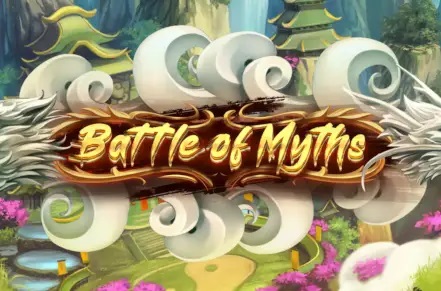 The background of Battle of Myths, a slot machine developed by Elysium Studios, features the tall mountains of China and a Chinese temple with beautiful waterfalls. Elysium Studios is known for their visually stunning slot machines and, although they are a relatively new company, they have already proven their ability to create high-quality games. I have high expectations for Battle of Myths, particularly in the Eastern market.

In the Battle of Myths slot game, there are 4,096 ways to win due to the 6×4 reel layout. The game is known for its high volatility, which means that although it has a low return to player percentage of 95.67%, it has the potential to provide players with wins of over 4,000 times their original wager. The game also includes features such as increasing multipliers, wild symbols, various types of free spins, and other mechanics that can enhance gameplay.

In Battle of Myths, you can place bets ranging from $0.20 to $40, which allows you to have the opportunity to win in various ways and spin the reels. It is uncertain what the maximum limit is for this slot game, but the individual symbol combinations do not offer high payouts, with the maximum being 4,096 times the initial bet (1x per combination of the highest-paying symbols). However, the game does have special features that may increase your winnings. The return to player rate for this game is 95.67% and the volatility is high (rated 5 out of 5).

Once you have created a combination of winning symbols in a game, those symbols will be removed and new ones will take their place, potentially leading to additional wins. After each series of wins, the multiplier for those wins will increase, but it will reset back to its original value at the end of the spin.

In Dragon Wilds, a dragon appears in the game and leaves wild symbols as it moves, potentially creating up to 6 wild symbols in total. This feature is activated randomly.

The Tiger Mega Wild occupies a larger area on the game board, taking up between two by two and four by four spaces.

Princess is a special feature that can transform regular symbols into wild symbols, which can help to create more winning combinations on the reels.

To unlock the free games feature, you must land either the Dragon or Tiger scatter symbol on the reels. This will add to a special meter and allow you to access either 8 Tiger Spins or 8 Dragon Spins. These free spins will include a guaranteed feature from the base game, such as Dragon Wilds or Tiger Mega Wilds. During the free spins, multipliers will only increase and will reset once the free spins are finished.

This slot machine has an Asian theme and is based on characters and creatures from Chinese mythology. The symbols on the machine include gemstones of various colors and items such as dragons, tigers, drums, a tooth, a lotus flower, and pearls.

Elysium Studios has seemingly created another hit with their slot machine game, Battle of Myths. The game boasts stunning graphics and a variety of unique features that are sure to keep players engaged.