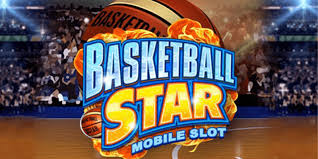 Basketball Star on Fire is a new slot from Microgaming, which was made through a partner studio called Pulse 8. The slot is a sequel for another game of theirs and it incorporates two or three new mechanics alongside a similar graphics to the original.

In Basketball Star on Fire, 5 reels are used and the slot comes with 25 active lines. You can win prizes worth up to 2,500x the stake and the slot has its RTP at 96.12%. The major features include the HyperHold Respins, free spins and stacked wilds.

Several prizes can be obtained while you are playing Basketball Star on Fire. One is the regular fixed bonanza of up to 1,000x the stake worth which is paid through the HyperHold Respins. The ordinary wins will improve, if luck is on your side and it could bring prizes of up to 2,500x the stake.

This, and the RTP is additionally at a level that most would be happy with, of 96.12%.

You will experience the game’s own logo on the reels, where it serves as its wild. It pays 10x the stake when it covers the full line while in different circumstances it might serve as a substitute. It is regular sized during most spins but it can land stacked for the free ones.

Regarding the bigger features, those incorporate a HyperHold Respin reward that we have already seen in several slots but not under this name. It will require at least 6 Coin scatters present on the reels at once and it will revolve around 3 respins, during which you are trying to gather more Coins. The triggering Coins and any new ones will get sticky and the respins reset each time the collection increase. You either fill the reels with Coins to win 1,000x the stake or you run out of respins. Each coin will have its own prize to give, worth up to 100x the stake.

We likewise discover scatters with the Basketball on the reels, they are used to trigger 10, 15 or 25 free spins, if you have 3, 4 or 5 on the reels. For these, you get additional stacked Wild Coins on the fifth reel and they are sticky there.

Generally, the graphics style in Basketball Star on Fire is similar to that of the original, which turned out in 2015. They are depending on pictures of coins, logos and basketballs for the feature images. Regular ones deliver pictures of players for the top four symbols, and of sneakers, boards, whistles, drinks and medals for the low paying ones.

The original game looked good enough and the same goes for the sequel also. It is generally not a bad design.

Basketball Star on Fire should be a decent option, as long as you are into basketball or you enjoyed the original online slot. It has a decent mix of RTP, features and top prizes including some other ones.