Back in the form 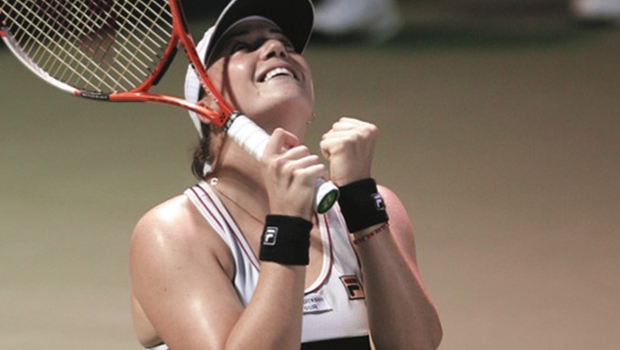 After sitting on the sideline for most of the time in the 2011 and 2012, the Winner of two WTA titles in 2010 Alisa Kelybanova is still searching for her game from four years ago, when she was a top fight.

She has beaten everyone that has set on the No.1 position throughout her career, including Ana Ivanovic, JelenaJankovic, Venus Williams Kim Ciljsters and more. She is now sitting at the player ranked 1149.

After entering a competition just outside Rome in a small town called Landisville, PA in May 2013, Kleybanova finally signed her name on a tournament after two years of being out of the pitch. It is the same tournament, the ITF Tournament, in the same town, Landisville, PA, where two years ago she played before she found out that she has a devastating disease of Hodgkin’s lymphoma. The disease was the bad news for her, and for her career, which at that time was on its highest peak, on the 20th position in the world’s list.

The cancer was not going to stop the proud Russian player from playing the game that she wanted. When she was playing tennis, her shots were from several meters behind the baseline, and as sharp as possible, sliding above the net, and making her enemies work as hard as she for the points. After a while out of the pitch she proudly posted on her website that she has beaten Hodgkin’s lymphoma 6-0, 6-0.

The Russian commented that she was ready for everything, that she was ready to get back and play again, to be healthy, and that’s what gave her enough confidence to do it. It’s the same as doing a very hard training, and go through one thing to get better at tit then focus on the other. As she commented on the O.S. Open, that the goal that was in her head and staying focused on the goal is what made her to forward without giving up.

After having her diagnosis public in 2001, she went to treatments in Italy, where she spent eight months. After that she was playing the game in Miami, and successfully won her first match after two close loses. Maria Sharapova commented that she is an inspiring person. Knowing that someone passed through a bad thing in life, and to come and play the game that she loves, it’s just inspiring, and Maria threw all her respect at Alisa.

But it wouldn’t be a good story if it ended there. The matches that she was forcing herself into left her exhausted and she did not played a game in the next fifteen months. After those fifteen months she had to participate in a game or tournament to maintain her high rank, and so she did, in Landisville, against Australian Brooke Rischbieth, with no chair umpire, with no line judges, with the level that Alisa hadn’t played since she was 14. Of course she won the game with 6-1, 6-1, but the real comeback is yet to be sen