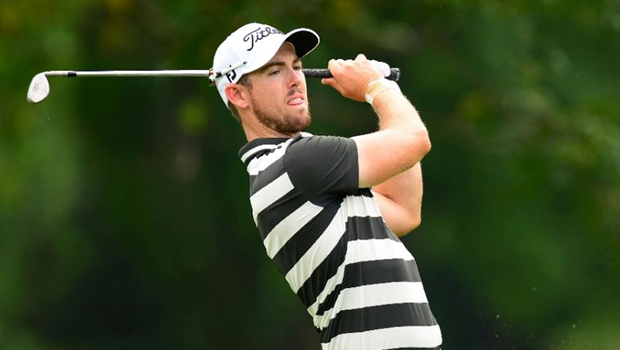 Kuala Lumpur (AFP) – Unheralded Nathan Holman of Australia used flawless putting down the stretch to widen his lead to two strokes at the midway point of the Maybank Championship Malaysia on Friday.

The strapping 24-year-old, who is ranked 176th in the world, manhandled the tree-lined fairways of the par-71 Royal Selangor Golf Club for a second straight day.

His six-under-par 65 followed an opening 64 and took him to 13-under for the tournament.

Earlier in the day, England’s world number 13 Danny Willett had caught Holman on the leaderboard at eight-under.

But Holman, who teed off later, fired on all cylinders again to pull away.

Besides driving the ball an average of 300 yards, his putting was superb, particularly down the stretch.

He holed three straight one-putt birdies from 15 through 17 to put some daylight between himself and the pack.

Holman is now two strokes ahead of England’s Richard Bland and five shots clear of a group of four golfers led by Willett.

“When I saw I was three shots clear after the turn there were a few nerves but I handled myself well and managed to pick up a couple of birdies coming in,” Holman said.

Holman is seeking his second career win after lifting the Australian PGA trophy in December. Prior to that victory, he had never cracked the top ten in any event in four years as a pro, according to the European Tour.

“After winning at home my next aim was to win a tournament overseas. So it’s great to have the chance to tick that one off the list so soon,” he said.

That win was the latest step forward in a run of improving play that has catapulted him up golf’s world rankings.

Starting Friday just a stroke behind Holman, he played well again but was unable to match his opening 65 due to some late miscues.

Willett confessed to fatigue after a whirlwind couple of weeks including the Dubai win, a celebratory week off at home in England, and the long trip out to Malaysia and its hot, humid environment.

“My energy levels collapsed on the back nine and I started making a few silly mistakes,” he said.

He finished Friday with a two-under 69.

Also in the hunt are three-time former Asian Tour Order of Merit winner Thongchai Jaidee of Thailand, who was six shots behind Holman, and former British Open champion Louis Oosthuizen, who was a further two shots back.

Those failing to make the cut for the weekend included two-time Major winner and former world number one Martin Kaymer of Germany.

The $3 million tournament, co-sanctioned by the European and Asian Tours, is the successor to the longtime Malaysian Open, which has been discontinued due to a sponsorship shift.