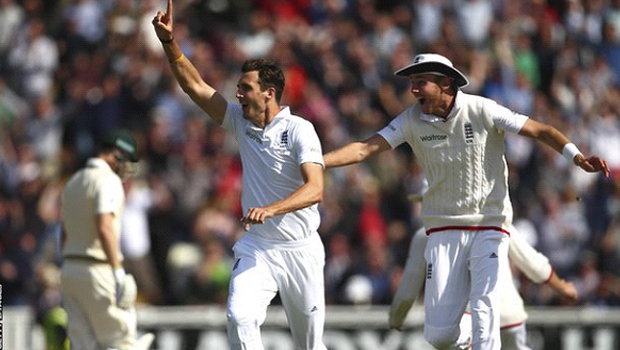 Ashes 2015: Steven Finn is the one to push England to victory

Steven Finn was the one who had the luck to take on a five-wicket haul as England managed to make another very close victory over Australia on another almost unbelievable day of Test cricket at Edgbaston, England.

David Warner with his swashbuckling 77 and his teammate Peter Nevill’s 37 are the ones who are responsible for the tight victory, as if was not for them, Australia would have lost a big time.

England, who previously managed to score 281 all out for a first innings is leading by 145, with Joe Root scoring 63 and Moeen Ali 59, and with these stats England is expected to be ready to take over Australia in the third day, and wrap up a fast three day victory over their rivals.

Although The English have the advantage Australia is the one who has 186-7, 23 runs ahead of England with only 3 seconds innings wickets in hand, and that puts England’s coach Alastair Cook and his crew to be in a position to chase the victory to advance in the next stage of the competition, or in other words to win the priced urn, while Australians only need a draw to grab it from England in their homeland.

It is said that James Anderson had a huge impact on the game, and the negative that the Australians managed to wipe off and get close to their rivals is only because James left the field. He had to leave mid game to receive a treatment on his tight side, as he was unable to continue to play the game that he loves.

The hero in last the last game is Steven Finn and his ability to score two single-figured scores for the 1st time in 22 games that were previously played in this tournament.

A smart move was also noticed by the coach of England, Cook, who immediately after the first single figure score switched Steven Finn from the City End to the Pavilion End and that was the main reason that Finn managed to score the second single figured score.

It is left for us to watch the last amazing game where the English need to run and go all in to secure their hands on the Urn, but things will not be as easy as they seem, as Australians came a long way to do the same. They have the potential as well as the individuals to counter the English, so it should be one really exciting match.