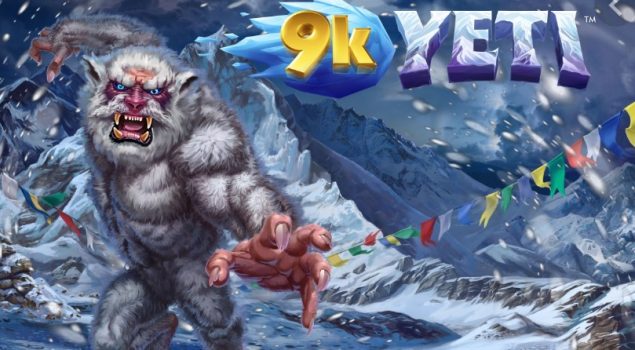 4ThePlayer is taking players on an epic expedition with the launch of its first slot release via Yggdrasil’s YGS Masters, the content initiative’s fourth title of 2019.

Players can encounter the mystical Yeti and experience mountains of wins of more than 9,000x their stake in this 4,096 ways slot.

Discover Yeti footprints and trigger free spins with a snowstorm feature where any losing spin can be transformed into a guaranteed win. Players can be stuck in the storm for a while with up to 88 free spins triggered complete with an abundance of retriggers.

This monumental game also features an industry-first innovation – Big Reel Portrait Mode™ bringing portrait play to life – using up to 70% of the screen compared to the normal 20%. Stacking the reels on top of each other and spinning right to left, the feature creates an immersive experience never seen before in mobile play.

Stuart McCarthy, Head of Studio Partnerships at Yggdrasil, said: “We’re delighted to be launching our fourth YGS Masters slot of the year with 4ThePlayer

“Together we have created a fantastic mobile-first game that players will instantly take to and want to come back to time and again.”

Andrew Porter, CEO of 4ThePlayer said: “We are very proud of our first slot release. Being players ourselves we have spent a lot of time making sure it’s a game we would want to play. Adding the excitement and big win potential we want from games.

“It’s particularly pleasing to create a user-friendly portrait play with our industry first Big Reel Portrait Mode™ creating a portrait play that players can easily see, engage with and enjoy.”

In the last 12 months, Yggdrasil has signed six of the world’s brightest and best studios including Rabcat, 4ThePlayer, AvatarUX, Northern Lights, Dreamtech Gaming and Fantasma Games and continues to see strong interest from others who want to join the programme.

The game was pre-released on 31st October across all GVC’s brands with the title available on general release today.

Yggdrasil is a provider of superior online gaming solutions for igaming operators. The business was founded in 2013 and has since emerged as one of the industry’s most respected and acclaimed suppliers. Yggdrasil operates a highly scalable business model and covers three product verticals: Casino Slots, Table Games and Bingo, in addition to the business verticals: YGS Masters, Yggdrasil White Label Studios and Yggdrasil Dragons. Since its inception, Yggdrasil has embarked on a solid growth trajectory enabled by a strong corporate culture focused on innovation, creativity, quality and technology leadership. Yggdrasil is headquartered in Sweden and has offices in Malta (operational HQ), Poland and Gibraltar.

4ThePlayer is an up-and-coming creator of mobile-first gambling games. Founded in July 2018 by two luminaries of the gaming industry: Andrew Porter and Chris Ash who have a combined 40 years of gaming industry experience. Later joined by Henry McLean with a further 14 years’ experience. The three have a proven track record in gaming having created success in startups and FTSE 250.

4ThePlayer’s mission is to create the most exciting games for players, only using the best math profiles with big win potential. Focusing on concise and engaging game mechanics, eschewing bloated over-engineered gameplay. They have responsible gaming at their core, only using adult designs, themes and features. Believing in innovation with entertainment, creating new gambling focused experiences for their players.

All games are built from the ground up to propagate well through all forms of marketing and by word of mouth. As well as being closely integrated with the latest platform and promotional tools.