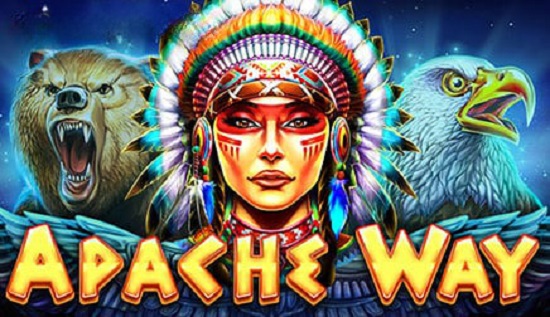 Red Tiger this time pulled out a Native- American online game by the name Apache Way. The slot comes with loads of genre – specific chestnuts. This could be just what you are searching for or not. Allow us help you find out which side of the fence you stand.

Red tiger has been to this part of the globe several times. They have brought in a whole lot of cultural reference in Apache compared to their other games before.

Gamers find themselves carried to the range in North American game territory. Rocky outcrops lie far away in the horizon; behind the cactus is a scrubby appearing landscape with some  tepee placed to the left-side of the display.

Players who enjoy games found in this land should rejoice in Apache Way, since Red Tiger has a package of clear and  colorful graphics. Its panpipe soundtrack is pleasing most, especially during mega win count ups or whenever bonus spin is in action.

You may not expect lots of count ups with this game since Red Tiger went for middle ground when we talk of winning ability that hits 2571x your bet. Apache Way is accessible from any device, a medium volatile game that gives stakes of 10p/c to 20 euros for every spin. The games action takes off on 5 reel and 3 row panel where gamers can anticipate an RTP of 95.75%

Twenty five fixed paylines pass through the game board,forming wins anytime when 3-5 matching icons land along, beginning from the left side.

Find the 10-A cards with feather-like decorations on the pay tables lower side, awarding 0.6 – 2.5x the bet for every line of five. Above the 10-A cards are eagle premium, cougar, bear and snake symbols, whose worth is 8-20 x your bet for every five kinds of hit.  Wilds fall on the reels and earn the same price as eagles when forming their winning lines. Note also that you can utilize wilds to stand in place of paying icons.

‘Ritual of the sun’ , a hold and win style addition and a free turns bonus round are the two major features you will come across while playing Apache ways.

‘Ritual of the Sun’

Once respins come to an end, the worth of Suns are summed up and prized. If the display is packed with Sun icons, an additional 2,000x the stake is prized as well.

These icons  are available on 1, 3, and 5 reels, while landing on three of them gives 5 free turns. In this turn, the three center reels make a combo to carry 3 by 3 sized Mega icons. Landing a 3by3 Mega Free turns icons by itself awards an extra plus 3 free rounds. Also, landing a 3 by 3 Mega icon bearing 1 or 2 normal size free rounds scatters pay 4 or 5 free rounds , respectively. You can as well activate the Ritual of the sun attribute when 3by3 mega sun scatter falls on the combined reel.I

If you are thrilled by the Wolf of Gold game style and a production by Pragmatic Play, you should not struggle catching up with the Apache way. Well, the two slots may not appear similar at a glance but gaze a little longer and the similarities begin glaring.

Both bear a North-American theme involving different animals and comparable attributes. The Apache  way lies more on Native America’s iconography. The game is pleasant to the senses and of course very attractive graphics at sight and nice sounds for your ears.

Its gameplay is where it all lies, offering the hold and win attribute in one of the bonus spins and additional spins with a combo of reels on the other.

If the gamers make it to load all positions when the ‘ritual of the sun ‘is active,rewards are plenty and we consider this a positive move.If you fill the entire grid with sun scatter icons, that would take gamers close to achieving the slots maximum potential that scales up to  2571.8 times the stake.

It’s somehow tough to see the maximum win taking place in additional rounds, not even with the 3by 3 Mega icons hitting on every round.

Apache Way is not likely to achieve most originality rewards because it has borrowed a number of its add-ons from a game that came earlier.Consider however that it has some uniqueness like a sun scatter lock system.

Although Apache Way does not possess the vigor to challenge other hold ‘n’ win games, still it has the capacity to captivate a group of gamers .If you are on the lookout for a more cultural sided game, Apache Ways is here for you.